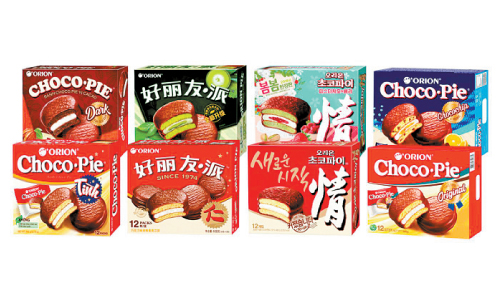 Since the snack was introduced in Korea in 1974, Orion has sold a total of 5.242 trillion won worth of Choco Pies worldwide.

Last year alone, Orion sold 2.3 billion Choco Pies in 60 countries, including China, Vietnam and Russia, where it built manufacturing plants of its own.

Orion originally took the Choco Pie overseas by building a factory in China in 1997. In 2006, the company built factories in Vietnam and Russia.

The snack is especially well-received in China, where its local brand name, Hao Li You, translates into “good friend” in Chinese.

The confectionery company also said that product localization was a key to the snack’s popularity in foreign countries. In Vietnam, for example, Orion released a dark chocolate version. In China, it offers a matcha flavor, which has been a hit.

“We’re very grateful for the love [people have shown Choco Pie] over the last 45 years,” said a spokesperson for Orion. “We’ll continue to strengthen our product and actively send the snack abroad to emerging markets and make it a global Choco Pie.”