Mother of Korean hero in Japan aims to mend ties

Mother of Korean hero in Japan aims to mend ties 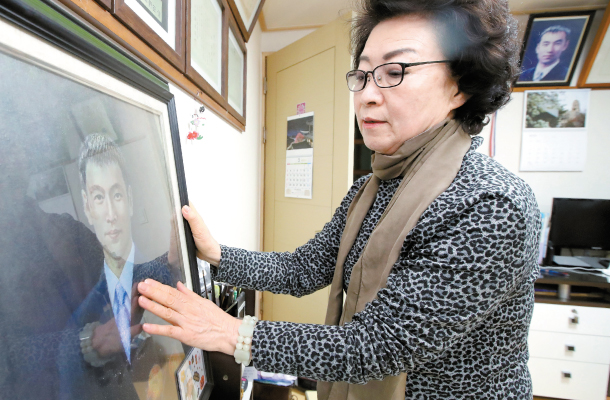 Shin Yoon-chan, the mother of Lee Soo-hyun, with her son’s picture at her home in Haeundae, Busan, on March 26. [SONG BONG-GEUN]

The mother of Lee Soo-hyun, a Korean exchange student who died trying to save a man who fell onto Tokyo train tracks, plans to continue building bridges between Korea and Japan.

Lee, then 26, died saving a Japanese man who fell on the tracks at Shin-Okubo Station in 2001. Another Good Samaritan came down onto the tracks to help Lee, but all three people were hit and killed by a train.

Lee Seong-dae, his father, died on March 21 of a cerebral hemorrhage. After his son’s death, he had founded the LSH Asia Scholarship Foundation on Jan. 26, 2002. He worked for the foundation for 17 years as its honorary president to ensure his son’s name was remembered.

“My husband’s death was sudden, so he wasn’t able to leave a will,” said Shin Yoon-chan, 70.

“For the first time, I attended my son’s memorial service in January alone because my husband had shown signs of a cerebral hemorrhage,” said Shin.

“It was very hard for me. I feel my husband’s absence when I think about going to the scholarship award ceremony in October by myself.”

Both parents attended their son’s memorial service every January in Tokyo.

The foundation seeks to build connections between Korea and Japan and awards scholarships to Asian students who come to Japan to study. Through 2017, a total of 844 students from 18 countries received scholarships from the foundation. These scholarships were funded by donations including the ones that Japanese donors sent in 2001.

The foundation’s efforts were recognized by the Japanese government in 2015 and Shin’s husband was awarded the Order of the Rising Sun.

The award has been bequeathed in the Japanese emperor’s name since 1875 to those who have contributed a substantial service to the country or to the public.

Shin said the reason why she and her late husband are so attached to the foundation is because they both think their son should not be forgotten.

“I thank the Japanese and Koreans who have continued to remember Soo-hyun for 18 years,” said Shin. “I also thank Taro Kono, the minister of foreign affairs of Japan, for paying his respects [to my son].”

Shin said that she started to pray for her son since he went to middle school because of his chivalrous spirit. When she wants to see her son, she visits Youngnak Park, northern Busan, where he is buried.

“When Soo-hyun visited home while he was studying abroad, he said that he wanted to be the leading person in promoting Korean-Japanese friendship,” said Shin. “Like my husband, if I am offered the position of honorary president from LSH Asia foundation, I will accept it and will happily try to bring Korea and Japan closer.”

Shin also said that she becomes depressed when she thinks about how relations between Korea and Japan have worsened recently.

“It pains me when I think how hard it would have been for Yasuhiro Morimoto, the former Japanese consul general in Busan, when the Busan comfort women statue was installed in front of the Japanese Consulate in the city,” said Shin. “Korea and Japan are inseparable economically and culturally. I wish Japan would take bolder moves to enable the relationship between Korea and Japan to become amicable.”

Morimoto met Shin when he attended her son’s memorial ceremony in 2017. He was the Japanese consul general in Busan when the monument to victims of Japan’s wartime sexual slavery was first installed in Dec. 28, 2016.

Morimoto was ordered home to Japan in January 2017. He was soon replaced by Hisashi Mishigami for criticizing the Japanese government’s decision to bring him home at that critical moment, according to Sankei Shimbun, a leading Japanese newspaper.