But the highlight is the artist’s installation, “All of a Sudden, Drawing the Space,” which is part of his solo exhibition at Hakgojae Gallery, central Seoul. In the installation, a pile of traditional Korean paper, or hanji, hangs from the ceiling in a line with subtle changes in height. The pile casts its reflection on a square pond filled with meok, East Asian traditional black ink, while also casting shadows on the wall, which is reminiscent of the layers of mountain ridges in East Asian ink paintings of landscapes. 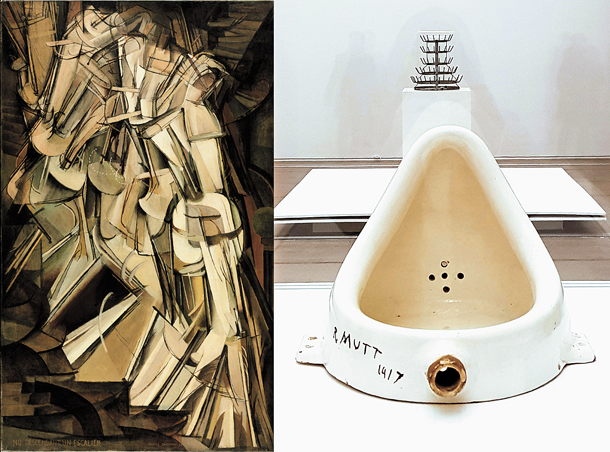 Through April 7: The largest-ever retrospective of artist Marcel Duchamp (1887-1968) in the Asia-Pacific region has been co-organized by the MMCA and the Philadelphia Museum of Art, which possesses the world’s largest collection of Duchamp’s works.

The Korean exhibition features about 150 pieces from the U.S. museum, including the most famous - or notorious - “Fountain” and other Duchamp “readymades.” He chose a ready-made urinal, signed the pseudonym “R. Mutt” on it and displayed it under the title “Fountain.” He said he “took an ordinary article of life, placed it so that its useful significance disappeared under the new title and perspective, thereby creating a new thought for that object.”

The retrospective is arranged chronologically and divided in four sections. The first section includes “Nude Descending a Staircase (No. 2).” The second section includes the famous “readymades,” including “Fountain” and “Bicycle Wheel.” Among the exhibits in the third section are U.S. artist Man Ray’s photographs of Duchamp dressed as a woman - his female alter ego Rrose Selavy, a play on words of the old phrase “Eros, c’est la vie.” The fourth and final section features drawings, small sculptures and photos made by Duchamp during the process of creating the room-sized diorama “Etant donnes.”

Through April 10: Each of the 26 abstract paintings now on view in the solo exhibition of artist Je Yeoran, 59, demonstrates her vigorous style of painting across the canvas. They are all a part of her iconic series titled “Usquam Nusquam [Anywhere Nowhere].”

Instead of a traditional paintbrush, Je uses a squeegee. A variety of colors and textures are mixed and, sometimes, the paint raises above the canvas, resembling Hokusai’s “Great Wave.”

What leads Je to paint is “something that drives you to life or the feeling of experiencing life,” she said.

Admission is free. The gallery is closed on Sunday and Monday. Go to Hansung University Station, line No. 4 , exit 6 and take bus 1111 or 2112 to get off at Seoul Dawon School stop.

Through June 30: To celebrate the 30th anniversary of the museum’s opening, the Kumho Museum of Art is launching a massive three-month project to showcase works by nearly 70 rising artists.

Since 2004, the museum, which is sponsored by the Kumho Asiana Cultural Foundation, has selected 69 promising new artists each year as part of its “Kumho Young Artist” program to offer support as well as exhibition opportunities.

Every month through June, the museum will display works by around 20 of these past “young artists,” bringing the total number of featured artists to 66, excluding three artists who aren’t currently active.

Notable artists include Jung Jae-ho, known for his oriental painting, and An Jung-ju, an award-winning media artist.

The current exhibition, which runs through April 21, holds 62 works including paintings, photographs, installations and videos by 19 artists selected to the program in its first two years.