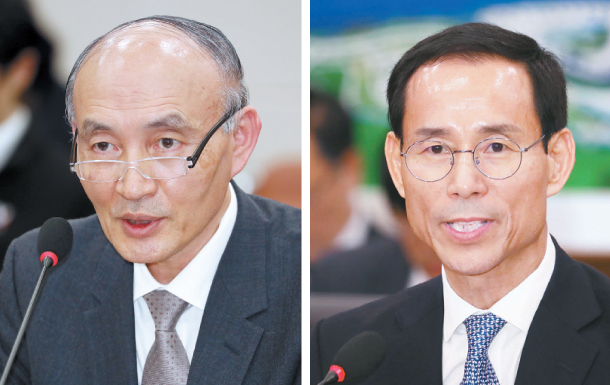 President Moon Jae-in withdrew his choice for science minister on Sunday after it was discovered that the nominee attended an international conference organized by a group that has been found to have engaged in deceptive practices.

Yoon Do-han, Moon’s senior secretary for public affairs, said on Sunday that the nominee, Cho Dong-ho, lied to the presidential office about his participation in the conference, implying that the Blue House was unaware of the information. Yoon stressed that had the Blue House known, Moon would not have tapped Cho, who currently teaches electrical engineering at the Korea Advanced Institute of Science and Technology (Kaist) in Daejeon.

Yoon apologized to the public for disappointing them, saying the Blue House failed to live up to their expectations in nominating Cho.

It was the first time Moon withdrew a minister-level nomination, though several people have stepped down on their own, including Choi Jeong-ho. Choi, Moon’s latest nominee for minister of land, infrastructure and transport, announced Sunday he was voluntarily bowing out after opposition lawmakers accused him of real estate speculation.

Yoon didn’t blame Choi on Sunday nor admit any fault in nominating him, saying it wasn’t illegal or against Blue House guidelines for high-level government officials to own three houses.

Yoon said the Blue House didn’t have any plans to withdraw other nominations.

Nominees are subject to non-binding confirmation hearings conducted by the National Assembly before their formal appointment, a brutal process during which the nominees often have to endure vicious assaults on their reputations from opposition lawmakers. Those who voluntarily step down usually do so after their hearings. The hearings for the seven nominees were held over three days starting on March 25. The main opposition Liberty Korea Party announced it would not endorse any of the nominees and urged Moon to tap new ones.

By law, Moon doesn’t need endorsement from the National Assembly to appoint ministers, meaning he can go ahead and appoint the remaining nominees. Asked whether anyone in the Blue House would be held accountable for recommending the two nominees who dropped out Sunday, Yoon, the presidential senior secretary for public affairs, told reporters that relevant discussions have not been raised so far in the Blue House, but added they could in the future.

On Cho, Moon’s ex-nominee for the minister of science and ICT, Yoon explained that Cho did not inform the Blue House about his participation in a “flimsy overseas academic conference.” When the Blue House asked him whether he attended any of such conference, Cho was said to have replied that he hadn’t, which is why the presidential office was unaware of his attendance of the 2017 World Biomarkers Congress, held in Madrid and organized by Omics International.

Cho’s attendance was revealed on Saturday when a local daily reported that the Blue House had recently found out about his participation and concluded not to appoint him.

The Kyunghyang Shinmun quoted Cho as saying that productive talks were shared during the conference, challenging accusations that Omics International was fraudulent.

According to an article published in The New York Times on Dec. 29, 2016, titled “A Peek Inside the Strange World of Fake Academia,” Omics International is known in academia as “a leader in the growing business of academic publication fraud,” which creates scores of “journals” that mimic the look and feel of traditional scholarly publications, but without the integrity. The Times suggested that Omics was committing “conference fraud,” citing a case of a New Zealand college professor whose paper submitted to an Omics-sponsored conference was accepted within three hours. That paper was written utilizing an auto-complete function on his phone.

The U.S. Fair Trade Commission received a preliminary injunction from a federal court in 2017 ordering Omics to cease deceptive practices.