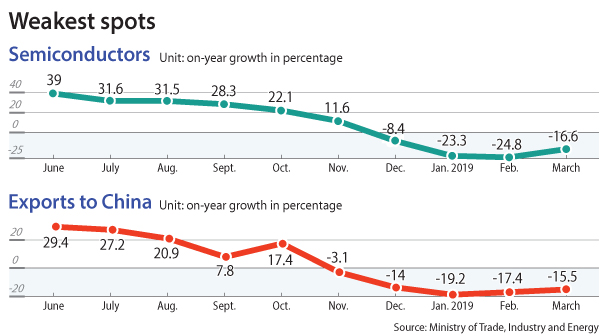 Korea’s exports fell for the fourth consecutive month in March due to weaknesses in semiconductors and demand in China.

But with imports also falling, Korea was able to record a trade surplus for the 86th consecutive month, a record. Despite the continuing fall, the government expressed confidence that the situation will improve in the second quarter of this year with higher demand for computer chips and on a better outlook for China’s economy due to government stimulus.

According to the Ministry of Trade, Industry and Energy on Monday, Korea’s exports fell 8.2 percent to $47.1 billion in March. Although this was less jarring than February’s 11 percent drop, export weakness has prompted the government to offer countervailing measures, including expanding trade financing, last month.

Semiconductors account for 19 percent of all Korean exports. While exports of semiconductor to the United States rose 32.4 percent to $320 million, exports to China, a major customer, fell 31.9 percent from the same period a year ago to $2.3 billion. The ministry said one of the biggest reasons for falling exports of semiconductor was weak sales of smartphones, as first quarters are usually a slow season.

Among the major 20 export items exported by Korea, which now include so-called new industries, such as robotics, only four areas had good growth: ships, fuel cells, biohealth and electric vehicles (EV).

The ministry said strategic vehicle exports went up, including new SUVs and environmentally friendly vehicles, but a reduced number of working days and the ending of some car models led to sales reductions.

Despite the trade surplus, a decline in import is equally worrying considering that Korea’s facilities investment has been on a continuing decline and the manufacturing industry’s operating ratio is falling.

The government remained optimistic, expecting the situation to turn around in the second quarter.

“In the case of semiconductors, we expect export volumes to improve compared to the first quarter,” said Park Tae-sung, head of trade and investment at the Trade Ministry.

Park added that in the case of China, while the ongoing trade conflict between it and the United States remains a major factor, the recent drive by the Chinese government in stimulating its domestic market will have a positive effect on Korean goods exported to China.

“We expect consumer goods [exports] to improve as of the first quarter,” Park added.

He added that the government expects exports from biohealth goods and environmentally friendly vehicles to continue to grow.

“The government is continuing to strengthen measures that will improve the competitiveness of major industries,” Park said, “especially in products that overlap with China.”