LEE SO-A
The author is a reporter at JoongAng Ilbo Innovation Lab. 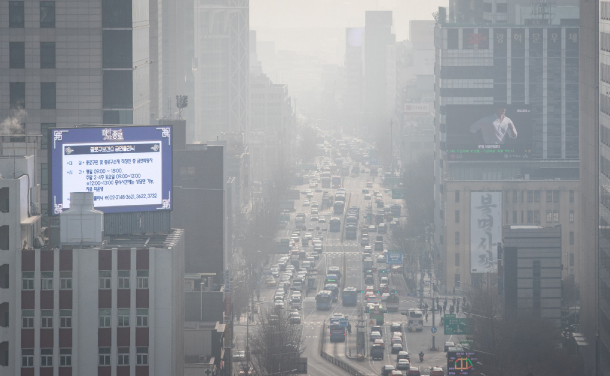 The air in downtown Seoul is thick with fine dust on March 28. [NEWS1]

A friend of mine was hospitalized for a high fever, but was not informed of their diagnosis for a long time. The doctor may have been incompetent, so he considered moving to another hospital. He was furious and worried. Fortunately, the fever was controlled, and my friend recuperated. It turned out that the hospital diagnosed him with hemophagocytic lymphohistiocytosis and had been providing care. But since it is a rare and dangerous disease, the hospital did not inform the patient and family of the disease until the condition was under control.

I hoped for the same regarding the fine dust. I thought the government did not make it public because people might get anxious, but at least had a plan. Korea is a developed country and this is not a new issue.

Looking back, I inquired of a high-level Blue House official about the nature of fine dust in 2016 during the Park Geun-hye administration. He said that I should worry about getting married. I made the same inquiry to a lawmaker and was told it was unimportant to them as the ruling and opposition parties were in confrontation. When the administration changed, the government pledged to reduce fine dust. But there has not been a policy that understood the inconvenience and suffering of the people.

In early March, Korea had the worst fine dust levels in the world. Hundreds of complaints were posted on the Blue House online petition board every day. It felt like people were crying out for a solution. The Blue House and the government began to refer to fine dust as a “disaster.”

Korea’s fine dust level has to be “very bad” without changes on China’s side no matter how hard Korea works. By now, scientific evidence and analysis from several years should have been presented to China in a bid to seek a joint solution through cooperation. Yet there hasn’t been anything yet. Politicians from the former and current administrations blame one another and the foreign minister made a ludicrous comment that fine dust from Korea also flies to China.

When I was young, my grandmother who lived through the Korean War told me that we should not expect anything from the country and instead take care of ourselves. I didn’t like her saying that, but she may be right: unless Koreans leave the country, we are patients or potential patients. Does the government know that one of the causes for the low birth rate is fine dust? Can I trust the government or should I take care of myself?