Retirees struggle almost as hard as their children

Retirees struggle almost as hard as their children 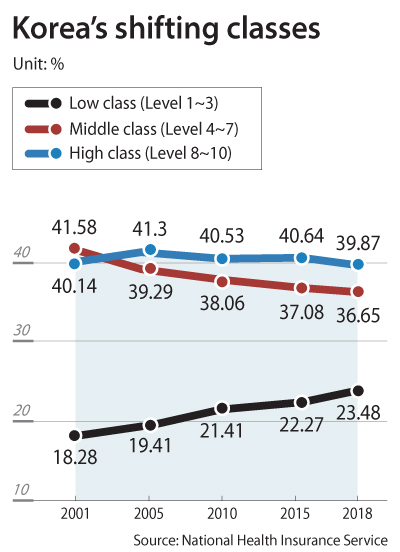 Retirees in their 50s and 60s, the solid middle class that built industrialized Korea, are careering from one part-time job to another and headed toward poverty.

“I feel suffocated,” said Kim Soon-chul, a 61-year-old on a visit to a state-run job agency in Mapo District, western Seoul, to apply for unemployment. “I still have to pay my children’s student loans.”

In February, Kim lost a job at a post office where he worked four hours a day.

“I thought I was going to work there for at least a year,” said Kim. “But I got fired after the government increased the minimum wage level earlier this year.”

Currently, the only income the family has is the 90,000 won his wife earns a day from a cleaning company. She started working there three months ago.

Kim worked for a logistic company for 20 years and was a high-ranking executive in charge of human resources. He once made 3 million won a month. But he lost his job and career during the 2008 global financial meltdown. Since then, he has worked in hard labor or menial jobs, from construction to cleaning buildings. Most are part-time.

Kim still has to work because his son has been spending years preparing for the civil service exam. His daughter failed to land a job after graduating from college.

“I can’t tell my children to find any old job as they could end up like me, unemployed, if they fail to find a stable job,” Kim said.

Without the unemployment allowance, Kim says his family would be in dire straits.

According to the National Health Insurance Service, there were more than 1.4 million households last year with parents in their 50s and 60s whose children were still covered on their health insurance. These were adult children between the ages of 26 and 39 who weren’t able to find jobs.

This is a stark reversal from the past when children put their parents as dependents on their health insurance after landing jobs.

As of February, the real unemployment rate - which includes part-timers, people studying for jobs in places like the civil service and people who have been discouraged from finding jobs - amounted to 24.4 percent, an all-time record.

Jeong Tae-sook, 66, owned a construction equipment company 20 years ago and made 20 million won to 30 million won a month. But his lot deteriorated after the Asian financial crisis of the late 1990s. He lost every penny he made after repeatedly failing in other businesses.

Since folding his own business in 2000, Jeong has been taking jobs wherever he can find them, including daily work that pays 120,000 won.

“Two years ago, I was hired by a conglomerate’s construction company as a contract worker,” Jeong said. “But they let me go last month because I was too old.”

He said he made 2 million won a month at the company.

“I’m paying 250,000 won every month on their student loans so they could at least save up for their weddings,” said Jeong.

Mr. Yoo, 57, said his biggest regret is forcing his youngest son to give up on his dream of becoming a professor because of the family’s finances.

Yoo retired two years ago and had to tell his son that the family would have to sell their house for him to continue pursuing that dream.

“Even then, it was not clear how long it would take for him to graduate and it wasn’t sure he would become a professor,” Yoo said.

“The extreme unemployment situation has forced young people in their 20s and 30s to continue relying on their parents economically,” said Hong Joon-pyo, a researcher at the Hyundai Research Institute.

“Kids who are deprived of opportunities to enter the middle class and their parents, who already fell from middle-class status, are all ending up in the lower class population.”

Sung Tae-yoon, an economics professor at Yonsei University, said in order to restore the middle class, the only solution is to create a large number of good-quality jobs.

“Creating more quality jobs is needed to recover the collapsed middle class, but doing so is difficult as initiatives like strengthening industrial competitiveness and increasing flexibility of the labor market need to be pursued as well,” Sung said. “We need conditional welfare programs to help the low-earning, retirement-age group make some kind of consistent income.”