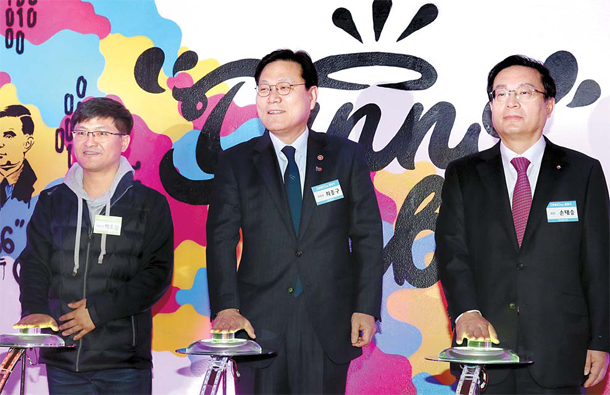 “DinnoLab will provide support on all sides not only including office spaces and open API [application programming interface] but also providing test bed environments where companies will be able to test [their services] using the cloud,” said Woori Bank President Sohn Tae-seung on Wednesday.

DinnoLab is part of the bank’s digital strategy of opening and sharing, Sohn said.

“The bank’s network and infrastructure will be provided for free, while we will also hold training programs on the Amazon Web Service,” Sohn said.

“I have been told that DinnoLab is a word that not only combines digital and innovation but also encapsulates the hope of creating companies that could dominate the fintech ecosystem like a dinosaur,” Choi said.

Choi said he hoped that innovative technologies and new ideas from fintech companies as well as high customer credibility of conventional financial institutions would result in creating positive synergy.