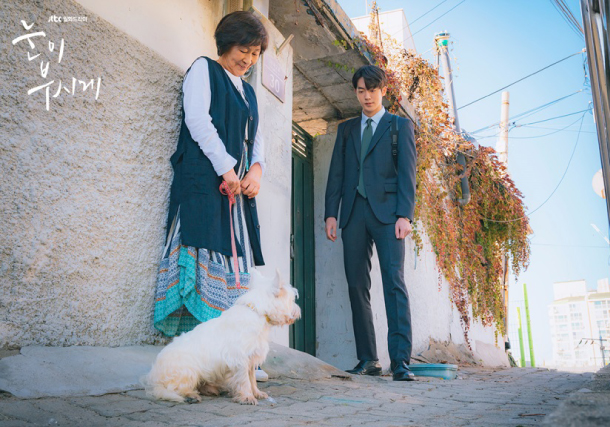 A scene in JTB’s popular drama “The Light in Your Eyes.”

LEE JI-YOUNG
The author is the deputy cultural news editor at the JoongAng Ilbo.

Dementia is a trending topic. More dramas and films now feature characters with Alzheimer’s. Changes in quality have also been made. Traditionally, there were stereotypical portrayals of elderly patients with Alzheimer’s. Their condition was often seen as a burden on their children. It was displayed as a source of family discord and was used as a device for emotional reconciliation. The latest change is that elderly family members with Alzheimer’s, who had been mere “backdrops” of the story before, have now emerged as main characters. In JTBC’s popular drama “The Light in Your Eyes,” Kim Hye-ja’s acting drew attention to this. The story is from the perspective of an old lady with Alzheimer’s. As she goes back in time — as is often the case for a person suffering from Alzheimer’s — she thinks her son and daughter-in-law are her father and mother and her grandson is her brother. “My Only One,” another television series where an elderly person with Alzheimer’s appears as a crucial character, had a rating close to 50 percent.

“Romang,” a movie released on April 3, is a story of an old couple suffering from Alzheimer’s together, revisiting romance from their younger years. Loss of memory becomes a guide for finding romance. Lee Mae-ja, played by Jeong Yeong-suk, says in the movie, “If I had known, I would have wanted Alzheimer’s earlier.”

According to the National Institute of Dementia’s 2018 Dementia Report released last month, 10.2 percent of elderly people over the age of 65 in Korea suffer dementia. The number of dementia patients will grow from today’s 700,000 to more than one million in five years. The total will be two million by 2039 and three million by 2050. This is why we need to consider dementia a part of our lives and look at it from various perspectives.

The National Museum of Contemporary Arts offer a “Praising the Routine” program for Alzheimer’s patients. They help patients visit the museum, enjoy the artwork and engage in hobbies. The Dancers’ Career Development Center has developed an education program for Alzheimer’s patients. It focuses on artistic activities rather than therapeutic activities following the advice of Danielle Teale, an instructor in the “Dance for Dementia” program in Britain. Just as finger muscle development is not the focus for children learning to play the piano, for dementia patients, dancing should be understood from an artistic point of view, not a functional one.

Even as you lose your cognitive abilities due to dementia, you are always a complete human being. Everyone deserves to find the meaning of life and enjoy their fair share. We have taken the first step.