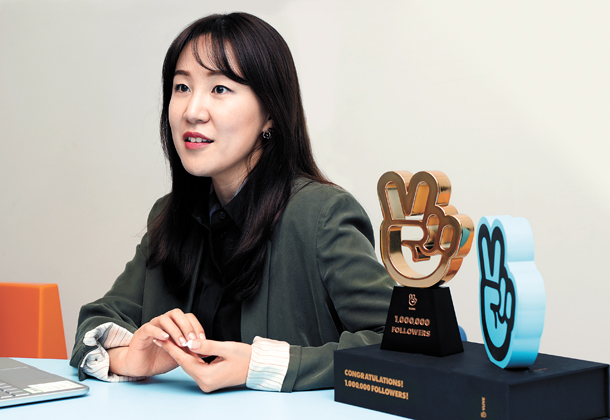 Kpop stars today come from a generation that is more open to interacting with fans, said Han Ah-reum, the head of V Live’s Fanship service team, during an interview with the Korea JoongAng Daily on April 3. [NAVER]

Just a few years ago, the private lives of celebrities were carefully concealed. Fans were kept at arm’s length as stars valued their privacy and the mystery and secrecy only added to their glamorous lifestyles.

But times have changed. As fans increasingly base their communities online and celebrity culture shifts to put a focus on personality, more K-pop stars are choosing to share more of their non-scripted lives on camera and online.

The largest video streaming platform for K-pop stars is Naver’s V Live. Launched in 2015, V Live’s mobile app has more than 66 million downloads and is visited by more than 29 million users per month worldwide. The site is best known as a platform where stars stream and save vlogs filmed during informal moments backstage at performances or at home.

“Unlike previous generations, groups that used V Live from the start don’t wish to be mysterious - they’re outgoing when it comes to reaching out to fans,” said Han Ah-reum, the head of V Live’s Fanship service team, during an interview with Korea JoongAng Daily on April 3 at Naver’s headquarters in Bundang District, Gyeonggi.

“Some of the big k-pop stars like BTS and TWICE have used V Live since their early days, and now they don’t feel like it’s difficult and it comes more naturally to turn on their cameras. A lot of them seem to feel like V Live is a space of their own.”

Han has overseen Naver’s partnerships with local entertainment companies for the last eight years and played a pivotal role in persuading them to take part in the live video service before its 2015 launch. Companies that manage celebrities in Korea, regardless of their size, are notorious for their closed business style and network.

Her latest project, Fanship, is an online fan club launched under V Live last week. The paid service offers access to exclusive concert videos, invitations to special offline events and an opportunity to reserve tickets earlier than others. The first batch of stars to participate in the new program included Sunmi, Chungha, KARD and Stray Kids.

Membership details - what is offered, how the club is operated, what kind of content is uploaded - solely depends on the celebrities and their management agencies. Naver offers a platform and development tool that is easy for these non-tech companies to operate.

“A lot of the tasks involved in managing fans - such as listing them and checking their identities ahead of fan meetings - [the entertainment agencies] were using methods dating back to the 1990s. A lot of it was manually done,” she said. 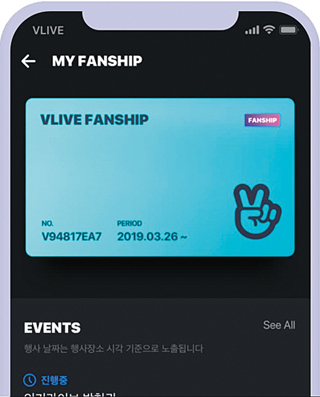 “Most agencies didn’t have a professional work force or technology to develop an online platform. We showed them that tasks done by people could be easily done by digital technology and some responded that they never knew problems could be solved this way.”

Good timing was the main reason Han said she was able to attract entertainment agencies to V Live: Fans and younger stars are more communicative online and fan bases overseas are also growing rapidly. Both these factors increased the demand for one platform or channel where companies can view their activities.

The launch of Fanship comes at a time when K-pop is no longer just a big business in the entertainment market but also for online service providers. During official visits to Korea last month, Instagram CEO Adam Mosseri and Twitter CEO Jack Dorsey both highlighted K-pop as an important trend that generates a lot of user activity on their social media platforms.

In fact, 85 percent of V Live’s users are based overseas, with Indonesia in the lead. The country ranks top among most K-pop stars’ V Live channel subscriber origins. Korea ranks second, followed by Thailand, the United States, Vietnam and China. In the past week, 65 percent of users that paid to join Fanship were foreigners as well. 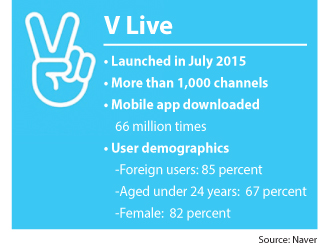 After the success of BTS, users coming in from the Americas and Europe have greatly increased, which in the past would have been unimaginable, said Han. Country demographics also differ by artist: Korea ranks first on BTS’s V Live channel whereas for girl group Blackpink and boy bands GOT7 and Monsta X, it is not in the top three list of fan countries.

Before Fanship, there was another paid service on V Live called Channel +, where paid users were able to watch exclusive videos. Han said the two years running the service had given her team insights into which fans don’t hesitate to spend money to get closer to their celebrities and what services cater to their needs.

“I think compared to local fans that have many options, foreign fans are more desperate to search for communication channels to find peers - we have forums and they’re mostly dominated by foreign-language speakers,” said Han. “It’s become a playground for global fans. Our boards also offer a function that classifies posts by language.”

Fanship was also motivated by feedback from entertainment agencies that noticed the loyalty of fans on V Live and wanted to offer more than just videos. Naver’s platform is an advantage to them in that it provides a tool to collect and analyze fan data, which has been hard as most fan bases are dispersed across multiple portal sites, online communities and fan sites.

“The K-pop market today is very mature and it’s time is spread out as a business,” said Han. “And to maximize business performance you need to collect data and pull insights from it. From that perspective, we expected Fanship to offer fans a platform to gather and offer agencies [a tool] to manage their data and connect them with businesses.”