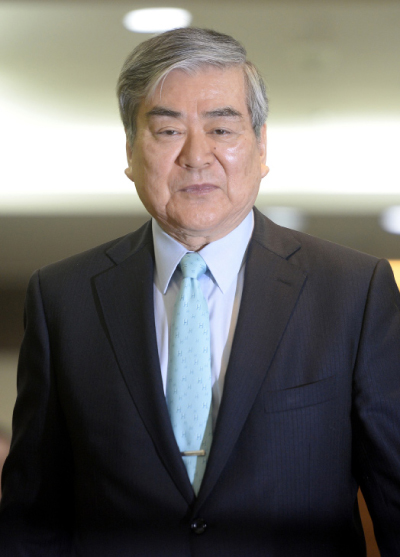 Hanjin said Cho had a disease related to his lungs. He had left for Los Angeles in December to look around the group’s hotel business and stayed there until he died, according to a group spokesperson. Hanjin operates the Wilshire Grand Center in Los Angeles.

“His treatment for lung disease went well and he was discharged from the hospital. But his health is said to have been suddenly aggravated following [the Korean Air’s] general shareholders meeting [held late last month],” the spokesperson said.

Cho’s family members - his wife Lee Myung-hee and three children Cho Won-tae, Cho Hyun-ah, and Cho Hyun-min - were all present at the hospital in Los Angeles when Cho died, the group confirmed.

As of 9:50 a.m., Hanjin Group said it had entered into an emergency management system, adding that key decisions regarding the group will be discussed at a presidential committee made up of the heads of Hanjin affiliates, including Cho Won-tae, son of Cho Yang-ho and president of Korean Air.

The Hanjin Group chairman seat lies empty for the time being. The group spokesperson said major management issues will likely be discussed after the funeral. The Korean Air chairman seat has sat empty since Cho was ousted last month.

Industry insiders believe that Cho Won-tae is likely to succeed his father as chairman of Hanjin Group, although there are concerns over likely disagreements from the National Pension Service (NPS) - the second-largest shareholder of Korean Air - and local activist hedge fund Korea Corporate Governance Improvement (KCGI), the second-largest shareholder of Hanjin Kal that had sought to shake up the group’s governance. The recent reappointment of the late Cho’s close confidante Hanjin Kal CEO Suk Tae-soo as a director is likely to help the Cho family continue its grip over the group.

Cho lost control of Korean Air at an annual general meeting held last month after the NPS decided through a committee meeting to vote against his re-election as chairman of the board of directors. The NPS said it would vote against Cho, who was on trial on charges of breach of trust and embezzlement, in a bid to improve the governance structure and enhance the company’s tainted image triggered by a string of scandals involving the Cho family.

The Cho family has been engulfed in a series of scandals over recent years, starting with the infamous nut rage scandal in 2014, involving Hanjin Group heiress Cho Hyun-ah. Since then, the family has been implicated in a range of incidents including abusing employees, immigration offenses and even smuggling luxury goods.