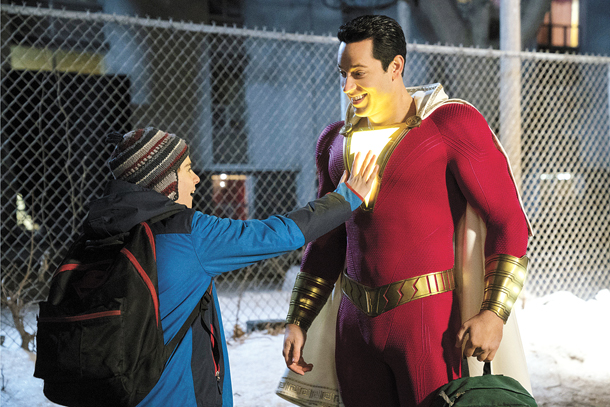 “Shazam!” ranked No. 1 at the box office in its debut weekend but received mixed reviews. “Birthday” and “Money” followed in second and third place over the weekend. [WARNER BROS. KOREA]

“Shazam!” took over the Korean box office this weekend, nudging out Marvel’s superhero flick “Captain Marvel,” which dominated Korean cinemas since its release on March 6.

From Friday to Sunday, “Shazam!” sold 355,000 tickets at 1,148 screens, accounting for 26.8 percent of the weekend’s ticket sales according to data provided by the Korea Film Council on Monday.

Starring actors Zachary Levi and Asher Angel, the film is the seventh production of the DC Extended Universe (DCEU), introducing a new superhero named Shazam to theatergoers. The story revolves around a 14-year-old foster child named Billy Batson who is chosen by the ancient wizard Shazam as a champion who is “pure of heart.” By shouting out the magic spell “Shazam!” Billy can turn into an adult superhero with various powers.

The domestic film “Birthday” sold a total of 276,000 admissions at 862 screens over the weekend, coming in at second at the box office. The film is receiving widely positive reviews due to the unifying message of comfort to families around the world who have experienced losing their loved ones. Starring big-name actors such as Seol Kyung-gu and Jeon Do-yeon, the film deals with the aftermath of the sinking of the Sewol ferry in 2014, centering on one family’s pain and loss after losing their son. Although their child is gone, the family decides to celebrate his birthday with his friends to commemorate him. 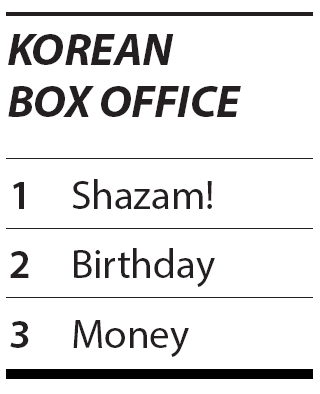 “Money” has remained in the top three since its release on March 20 and ranked third over the weekend with 230,000 admissions at 747 screens. It is about a stock broker named Jo Il-hyeon (Ryu Jun-yeol) and the struggles he goes through while trying to become filthy rich. However, after meeting a legendary figure in the stock expertise named “Beonhopyo” (Yoo Ji-tae) - which translates to “number card” - his life may never be the same again after he accepts a dangerous and illegal deal to become rich.

Horror movie “Us” slid down to fourth after reaching the top last weekend and “Captain Marvel” ranked sixth over the weekend. Marvel fans are getting excited for the upcoming “Avengers: Endgame,” which is scheduled to make its worldwide premiere in domestic theaters on April 24.

On Monday, Marvel Studios held a press conference with the actors appearing in the film, directors Anthony and Joe Russo, and Kevin Feige, CEO of Marvel Studios. The studio deliberately left vacant spots for the actors who were wiped out by the villain Thanos in “Avengers: Infinity War” (2018). On the same day, mobile game company Netmarble announced that it will host “Marvel Future Fight Cinema Day” on April 27 and 28 to celebrate its four-year anniversary of launching the game Marvel Future Fight. The service will launch a major update in accordance with the premiere of the film.