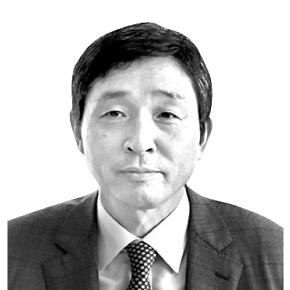 Lee Hyuk
The author is the secretary-general of the ASEAN-Korea Center.

The world is rapidly changing. The United States, which has long led the global order with its unique values, is now becoming more U.S.-centric, a change that is having a big impact on the world. In “The End of History and the Last Man,” published in 1992, Francis Fukuyama predicted that the history of democracy and market economics would continue in the world after the end of the Cold War. Almost three decades have passed since then, but diplomacy and free trade based on the values of democracy and alliances are facing serious challenges.

In the face of epochal changes to the existing order, Korea’s diplomacy is at a crossroads. We are witnessing signs that Korea will need to make significant revisions, if not a fundamental overhaul, in its relations with major countries such as the United States, China, Japan and Russia.

It is timely for Korea to add a New Southern Policy, which puts more firmly the Association of Southeast Asian Nations (Asean) and India on the strategic map of Korea’s diplomacy. This year marks the 30th anniversary of Korea-Asean dialogue. In 1989, bilateral trade between Korea and that bloc was only $8.2 billion, which increased to $160 billion in 2018. Asean is Korea’s second largest trade partner after China. 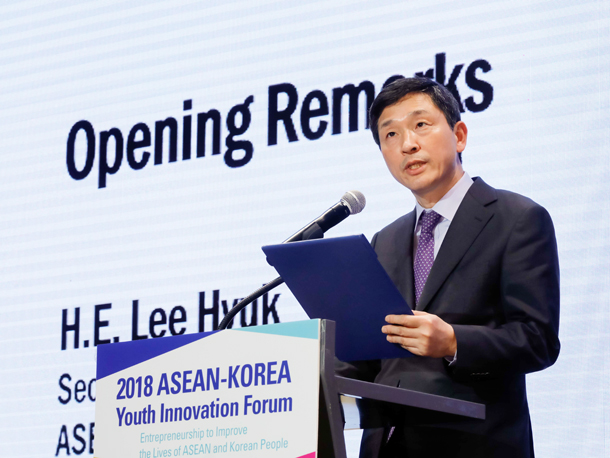 Lee Hyuk, secretary general of the Asean-Korea Center, delivers an opening speech last November at a forum in Seoul to promote youth innovation. [The ASEAN-Korea CENTER]

Asean is also the third-largest market for Korea’s investment after the United States and the European Union. Korea’s investments in the Asean countries are expanding fast. Last year, nine million Koreans visited Asean countries, while 2.4 million people from those countries visited Korea. As of now, 600,000 people from Asean countries live in Korea, and 300,000 Koreans reside in Asean nations. Korea’s strongest soft power — Hallyu, or the Korean Wave — has become a part of daily life in Asean, and Southeast Asian cuisine has become popular in Korea. Strong economic, cultural and emotional assets are being accumulated.

The Asean region is a place where superpowers once waged a fierce competition for hegemony. The full-fledged diplomatic battle among the United States, China and Japan will become more complicated as U.S. power shrinks while China’s increases.

As Korea’s economic and military powers are weak, it is hard for Korea to push forward aggressive — and sometimes forceful — diplomatic campaigns against the Asean nations. But Korea-Asean relations will continue as long as there is no armed intervention. They have strong potential to improve their bilateral friendship.

A special summit to mark the 30th anniversary of Korea-Asean relations will take place in Busan from Nov. 25 to 26. On Nov. 27, Korea will also have its first summit with the so-called Mekong nations: Vietnam, Thailand, Myanmar, Laos and Cambodia.

Leaders of the 10 Asean countries will visit Korea for the 30th anniversary summit, following the 10th anniversary in 2009 and the 25th anniversary in 2014. This signifies that Asean values its relations with Korea. Expectations are high that the summit will celebrate the incredible development of relations over the past 30 years and produce a productive outcome for the vision to develop the relations for another 30 years.

The Asean-Korea Center — established in 2009 to improve bilateral relations — will hold events such as Asean Week and Asean Train to offer opportunities to the Korean people to better understand the Asean countries. The era has arrived for Korea to “Think, Look and Go South,” and to pay more attention to Southeast Asia. Asean may not be a goose laying golden eggs, but it is a land of opportunity.

Korea and Asean share a painful history of colonization, Asian culture and a passion for a better future. When they cooperate, peace and prosperity can be achieved. Asean is the region where Korea’s abilities will shine and produce great accomplishments.
Translation by the Korea JoongAng Daily staff.