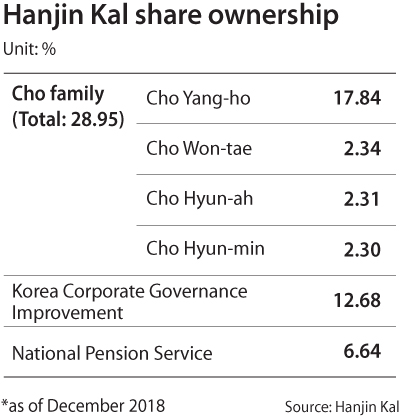 The family of Cho Yang-ho may have trouble maintaining control of Hanjin Kal and related companies, including Korean Air Lines.

The death of Cho and the rising activism of investors could bring the group increasingly under the sway of outside shareholders. Family members could be left as little more than passive shareholders of companies they long ruled virtually unchallenged.

Cho Yang-ho, 70, died due to chronic lung disease Sunday at a hospital in Los Angeles. He was the chairman of Hanjin Kal and its largest shareholder.

According to current data from the Repository of Korea’s Corporate Filings, Cho Yang-ho owned 17.84 percent of the company at the time of his death. He also held preferred shares in the company.

Ownership and control maintained by the family - a list which includes Cho Yang-ho and 12 others - totaled 28.95 percent, according to the data.

It is expected that Cho Yang-ho’s shareholding will pass to his son Cho Won-tae, president of Korean Air Lines and owner of 2.34 percent of Hanjin Kal shares.

Investment bankers and securities analysts say it is not clear how much of that shareholding will go to the son, as Korea has a 50 percent inheritance tax for all estates above 3 billion won ($2.6 million) in value.

The shares of Cho Yang-ho are critical to the control of the company, and any loss in the inheritance process could result in the family losing its already limited ability to vote down challenges.

Major outside shareholders have significant stakes in the company. Korea Corporate Governance Improvement (KCGI) owns 12.68 percent, and it disclosed in a regulatory filing Thursday that it will increase its stake to 13.47 percent.

The National Pension Service (NPS), the third-largest institutional investor in the world, has a 6.64 percent stake.

The NPS has become increasingly active in exercising its rights as a shareholder after passing a stewardship code in 2018 and has already opposed the wishes of the Cho family.

Other institutions as well as individuals are also becoming more active, especially in light of misdeeds, indictments, charges and prison sentences.

The Cho family’s “power in Hanjin Kal is held in check by NPS and KCGI,” Song Chi-ho, an analyst at eBest Securities, wrote in a report. “The fight over management control of the group is rising after Cho Yang-ho passed away.”

Analysts estimate that the Cho family could end up owning a total of 20.03 percent of Hanjin Kal after inheritance, which is lower than the combined 20.81 percent owned by KCGI and NPS.

“We cannot rule out the possibility of the family, already exhausted from continued public outrage, giving up inheritance,” wrote Park Kwang-rae, an analyst at Shinhan Investment, in a report. “The family members could make deals with major shareholders to hand over the group to a professional manager and still retain their key positions.”

Other analysts argue that Cho Won-tae may eventually prevail.

Although the inheritance tax could challenge his ownership and control, the family could sell shares of other companies and real estate assets to maintain its ownership of Hanjin Kal.

“We expect the Cho family to concentrate its efforts on selling its Dong Daegu Express Bus Terminal and land in Beomil-dong,” Yang Ji-hwan and Lee Jane, analysts at Daishin Securities, wrote in a report.

The asset in Beomil-dong, Dong District, Busan, is worth about 100 billion won, according to analysts. A total of 130 billion won could be raised from all the land sales.

The family could request paying the inheritance tax over the next five years, with loans collateralized using shares and dividend payments, analysts add.

They add that despite the challenges it is not likely that the governance structure of Hanjin Kal or of related companies will change.

It is likely that Cho Won-tae will be able to maintain management control after inheriting his father’s assets, they believe.

Even if the shareholding is divided equally, it is expected that the two other sibling shareholders will not challenge Cho Won-tae for the top spot.

Suk Tae-soo is CEO of Hanjin Kal, according to the company.

A spokesperson from Hanjin Kal added that group is currently being managed under emergency measures, with key decisions being made by a presidential committee made up of the heads of Hanjin affiliates, including Cho Won-tae.

The company declined to comment on the future of the company.