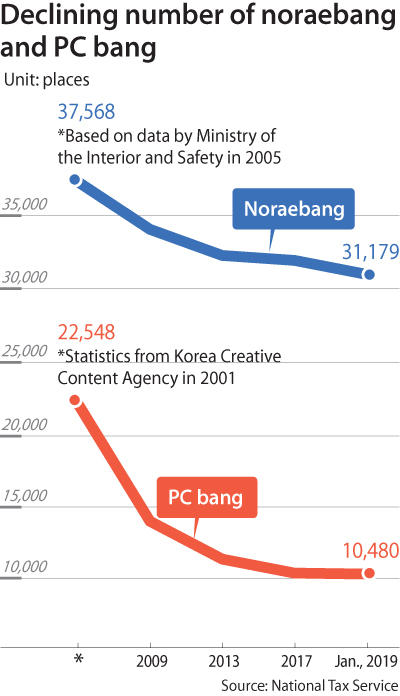 Karaoke joints and internet cafes, known in Korea as noraebang and PC bang, have been bedrocks of pastime culture for a long time.

Noraebang grew explosively after being introduced in the early 1990s. Yet, since the mid 2000s, that trade has been headed downhill. According to the Ministry of the Interior and Safety, the number of noraebang was 37,568 in 2005.

The downturn is attributed to a shift in work culture. After-work drinking isn’t as constant as before. Workers want a greater balance between their private life and work, and the government even shortened the workweek. Drinking alone at home is an actual trend in Korea - and nothing could be worse for the trusty noraebang.

“As the number of [noraebang] and sales per store decrease at the same time, the slump in the industry is becoming a long-term one,” stated a Woori Card big data-based report on self-employed businesses released by Woori Finance Research Institute.

Although coin noraebang - where people can sing a song or two - have actually slowed the decline, traditional noraebang owners are frustrated by the competition they represent.

PC bang were where several generations of students spent their free time playing games like StarCraft and Diablo. But the number of PC bang decreased from 14,212 in 2009 to 10,480 in January 2019, according to the National Tax Service.

The Korea Creative Content Agency says the number amounted to 22,548 in 2001 - meaning over half have vanished.

Who needs a computer - or a PC bang? - when you can do everything on a smartphone? In a 2018 report, the Korea Creative Content Agency researched 3,020 people from 10 to 65 years old, and asked whether they played games since July 2017.

Noraebang and PC bang were known as industries with low barriers for entry, so they were good business opportunities for retired Baby Boomers. Their decline is a problem for an entire generation of Koreans.