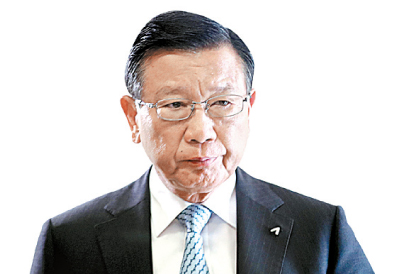 The group even promised to sell the airline if it fails to reach targets set by creditors within the next three years. It promised that former Chairman Park Sam-koo will not return to management and that the group will sell its assets to pay back the loan.

According to the KDB on Wednesday, Kumho Asiana Group submitted a restructuring plan Tuesday that included placing a 4.8 percent stake that Park’s wife and daughter own in the de facto holding company, Kumho Buslines, as collateral for the loan.

Kumho Buslines, the country’s largest operator of express buses, holds the largest stake in Kumho Industrial, which in turn, is the top shareholder in Asiana Airlines with a 33.47 percent stake.

Kumho Asiana Group said it will also add a 42.7 percent stake owned by Park Sam-koo and his son Park Se-chang in the express bus operator as collateral for the same loan.

Currently that 42.7 percent stake is being held by creditors as a collateral for a loan given to affiliate Kumho Tire, which was purchased by China’s Doublestar last year.

Asiana owes 3.2 trillion won to financial institutions, and has to repay 1 trillion won of the total this year, according to the company.

The latest proposal by the group follows pressure from KDB Chairman Lee Dong-gull, who has demanded action from Park.

“The creditor group will not give a penny in support that will lead to losses before the major shareholder takes responsibility,” said Lee during an interview with the JoongAng Ilbo last week.

“An effort to gain trust from the market, such as the major shareholder selling unnecessary assets, needs to proceed,” explained Lee. “That is a precondition for a memorandum of understanding [for a bailout plan or new loans].”

The KDB said Wednesday that it will hold an Asiana Airlines creditor meeting to consider the group’s plan.

Kumho Asiana has recently endured an accounting fiasco at Asiana Airlines, which led the Korea Exchange to halt trading of the carrier’s shares from March 22 to 25.

As a result, Park stepped down late last month from his position as group chairman and CEO of Asiana Airlines and Kumho Industrial to take responsibility.

Asiana Airlines accounts for 60 percent of the group’s annual revenue.