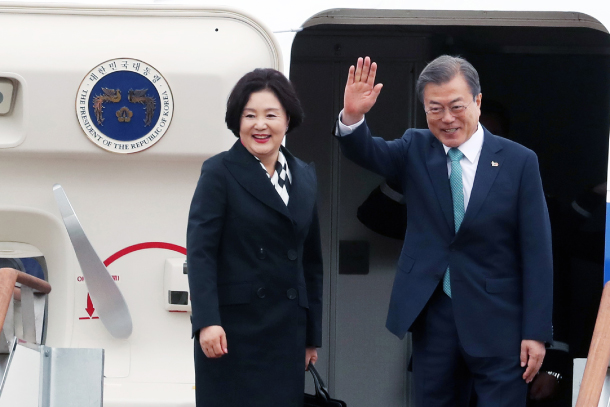 President Moon Jae-in and his wife Kim Jung-sook board the presidential airplane at Seoul Airport in Seongnam, Gyeonggi, on Wednesday, to fly to Washington for a bilateral summit meeting with U.S. President Donald Trump today. [NEWS1]

U.S. Secretary of State Mike Pompeo on Wednesday acknowledged that he saw North Korean leader Kim Jong-un as a “tyrant,” potentially throwing cold water on dialogue with a regime that considers its supreme leader unassailable.

Speaking to the Senate Appropriation Committee, Pompeo’s comments came as an affirmative answer to a senator’s question on whether he considers Kim a “tyrant” in the likes of Venezuelan President Nicolas Maduro.

“Sure. I’m sure I’ve said that,” Pompeo replied.

The secretary’s words were in stark contrast to U.S. President Donald Trump’s own last year when he said he “fell in love” with Kim and the praise he has lavished on the North Korean leader since. Even after his second summit with Kim in Vietnam fell apart in February, the president has maintained they continue to share a “very good” relationship.

In spite of the failed summit, Pyongyang has held back from criticizing Trump directly, saying that aides like Pompeo and national security adviser John Bolton persuaded Trump to walk out. The North has since expressed interest in a third summit with Trump to work things out, an idea which was reciprocated by both Pompeo and Bolton on different occasions.

Pompeo also said at the hearing, which was held to assess the State Department’s budget request for 2020, that the administration remained committed to a “final, fully-verified denuclearization of North Korea,” and that sanctions would continue to be enforced on Pyongyang until it was reached.

This unwavering stance by the United States could be a problem for South Korean President Moon Jae-in, who, at the time of hearing, was en route to Washington to nudge Trump toward some kind of compromise to revive the stalled negotiations with Pyongyang. Moon may face an uphill battle on Thursday when he meets Trump at the White House since their administrations remain clearly divergent on their diplomatic approaches to the North and its nukes.

While a Blue House official on Tuesday said that both Seoul and Washington remained aligned in regards to the “end state” of North Korea’s denuclearization, Lee Do-hoon, the South’s top official in charge of negotiations on the North, earlier this month brought up the idea that some kind of an “early harvest” was necessary.

The analogy, according to Lee, was meant to highlight the necessity of showing progress, big or small, in the dialogue, likely a reference to Seoul’s preference for a phased approach in which Pyongyang is given gradual economic incentives to encourage it to scrap its nuclear and missile programs.

The North, for its part, appears to be bracing itself for the long game, with a series of national-level political events taking place ahead of today’s first plenary meeting of the country’s newly-elected rubber stamp legislature, the Supreme Peoples’ Assembly. On Wednesday, it opened a plenary meeting of the central committee of its ruling Workers’ Party, a day after Kim Jong-un called for self-reliance from party members in the face of a “prevailing tense situation” faced by the country. 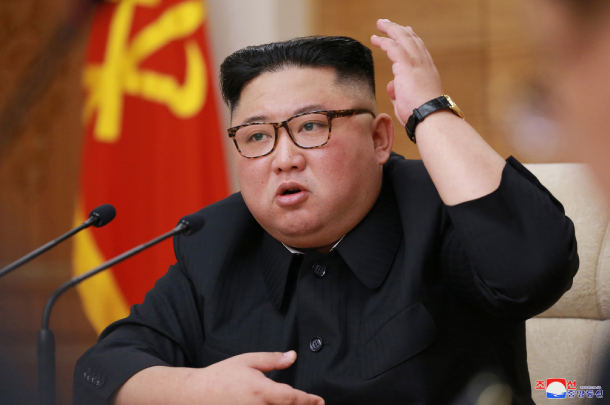 Presiding over an enlarged meeting of the Political Bureau of the party’s central committee on Tuesday, Kim made a “deep analysis of the matters pending urgent solution in the party and state” and called on officials to follow through on a “new strategic line” for the party with an attitude of “self-reliance and fortitude,” according to an English language report by the Korean Central News Agency, a leading state mouthpiece.

The politburo agreed to convene a plenary meeting of the central committee - the party’s highest body composed of key officials in Pyongyang and the provinces - on Wednesday.

The new strategic line is believed to refer to Kim’s call for a concentration of all the country’s efforts toward “socialist economic construction,” raised during the third plenary meeting of the party’s seventh central committee last April 20. In that meeting, Pyongyang officially announced it had completed its parallel pursuit of nuclear weapons development and economic growth, termed the “byongjin line,” and would henceforward solely focus on the economy.

Kim’s renewed affirmation of this agenda suggests the North may refrain from nuclear and missile tests to avoid losing the hard-won diplomatic gains reached through its engagements with Seoul and Washington.

While the North last month appeared to be gearing up for renewed provocations by restoring a missile launch pad on its western coast, it has held back from any test. Instead, it has been trumpeting its leader’s championing of economic development.

In Tuesday’s meeting, Kim also brought up what could be a major reshuffle of key personnel in his government, complaining about a host of “undesirable practices” in the party like defeatism and bureaucratism that are “chronic among leading officials” and should be “rooted out.”

Last month’s legislative elections in the country, while uncompetitive and legally obligated, nonetheless introduced new blood to the party’s rank and file representatives in its legislature, with 52 percent of the original pool replaced with new figures.