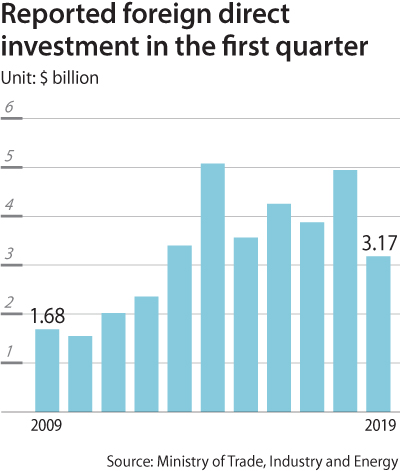 Foreign direct investment (FDI) fell 35.7 percent in the first quarter from the same period a year earlier. The total was the lowest in a first quarter since 2012.

The ministry blamed the decline in FDI, a global issue, on geopolitics.

“Global FDI in 2018 fell 19 percent compared to the previous year to $1.2 trillion,” read the report. “Declines in foreign investment in Korea from major investors, such as the European Union and China, in the past two to three years have had an influence.”

According to the United Nations Conference on Trade and Development, last year’s annual global FDI was the lowest since 2009, when FDI totaled $1.18 trillion.

Reported FDI from China, the United States and the European Union (EU) into Korea all fell in the first quarter from the previous year.

The ministry cited the U.S.-China trade dispute in explaining the fall in inflows from the two countries. It also pointed to the widening gap in interest rates between the United States and Korea.

Investment from the EU fell 47.3 percent compared to the previous year. The ministry explained that EU member countries focused investment internally rather than overseas due to no-deal Brexit concerns.

The ministry added that the overall decline in FDI was also due to the base effect, as last year’s figure was a high $4.93 billion. It also attributed the decline to foreign companies reporting investments earlier than initially planned as tax breaks for foreign invested companies ended late last year.

Reported FDI fell across the board.

Investment in the manufacturing sector in the quarter declined 21.5 percent to $1.21 billion compared to the previous year. The electronics industry received 74.8 percent less foreign direct investment, at $150 million. FDI in the transportation machinery industry fell 56.1 percent to $320 million.

Despite the overall investment fall in manufacturing, its share compared to the services sector increased as investment in services fell sharply.

Services foreign direct investment in the quarter dropped 42.5 percent from last year to $1.92 billion. In the real estate sector, it fell 91.1 percent to $90 million, from $1.03 billion the previous year.

In response to the fall, the Trade Ministry said it will strengthen incentives to encourage foreign investment. It has created a 50 billion won ($43.8 million) fund to support promising local small- to mid-sized companies and encourage foreign investment. The government has also created a program to match Korean companies with foreign firms looking to invest in Korea.