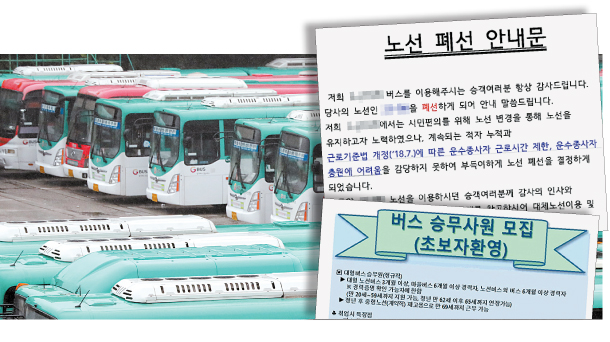 A bus company recruitment ad welcomes even inexperienced drivers. The letter above notifies customers of routes being closed. [JOONGANG ILBO]

The bus industry is on alert as companies with more than 300 drivers will be subject to the 52-hour workweek starting July.

In Gyeonggi, the situation is especially urgent as the area has a large number of intracity bus companies. The shorter workweek could force the reduction of some services.

Transportation and traffic crises are possible.

To meet the 52-hour workweek, bus companies in Gyeonggi will have to hire an additional 3,500 drivers, but they say they are in a tough position because it is difficult to find experienced workers, and it will be difficult to absorb the additional labor costs.

“In order to meet the 52-hour workweek, we have to have two shifts a day,” said the head of a bus company who requested anonymity. “Say, if we have 100 buses, we need to hire at least 70 additional drivers. How are we going to pay those extra labor expenses?”

The CEO said, in the worst case, the company will have no choice but to keep its buses in the garage.

“Many of the bus companies in the Gyeonggi area are in a similar situation,” the CEO said.

Some bus companies are looking into ending bus routes that generate no profit or cutting back on the operating hours.

“There’s no way we can find the drivers to operate two shifts per day,” said another bus company owner. “We are considering reducing some of the routes while also reducing the working hours by starting the day late or ending the day early.”

“My understanding is that the 52-hour workweek was adopted to reduce accidents that occur from long hours,” said an official of a bus company.

“But it is more concerning since in reality companies are trying to give the steering wheels of city buses to inexperienced drivers.”

The bus companies said their burden could ease if the government would approve higher bus fares.

This won’t be easy.

Gyeonggi Gov. Lee Jae-myung would have trouble raising prices if other major cities, such as Seoul, do not.

Raising fares only in Gyeonggi could result in public backlash.

Removing bus routes or cutting back on operating hours is also not easy as residents affected by the changes are not going to approve of the decisions.

“While, provincially, we consider that there is some need to end unprofitable routes or reduce the operating hours, the city and county governments think differently,” said Lee Young-jong, who heads the bus policy division under the Gyeonggi provincial government’s transportation bureau. “We would have to come up with a plan that would minimize inconvenience and the opposition from the residents.”

A bigger problem looms. The shorter workweek will be applied to bus companies with fewer than 300 employees January next year.

“There is a substantial number of small bus companies in suburban areas, and they would face huge difficulties in meeting the 52-hour workweek,” said Park Keun-ho, vice chairman of Korea Bus Transport Companies Association.

Labor interests are aware of the seriousness of the situation.

“In order to avoid the chaos, not only should the local government be involved, but there should be plans drawn up by the central government,” said Oh Ji-seop, general secretary of the Korean Automobile & Transport Workers’ Federation.

Kim Dong-jun, director of the Public Transport Division at the Ministry of Land, Infrastructure and Transport, said the situation will likely resolve itself when bus fares are increased to a reasonable level.

“Removing bus routes altogether and coordinating operating hours will cause a great deal of inconvenience to residents, so we will make sure to minimize those,” Kim said.