[Test drive] 3 Series: A fun drive that cares too much

[Test drive] 3 Series: A fun drive that cares too much 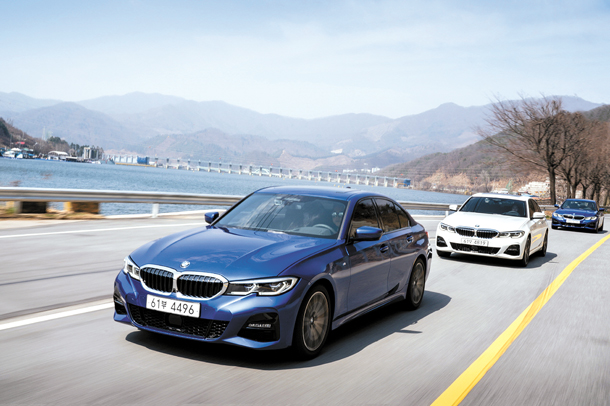 YANGPYEONG, Gyeonggi - After struggling through a difficult 2018 as its vehicles burst into flames across Korea, BMW is looking to win back drivers’ trust with its new seventh generation 3 Series sedan that comes with an emphasis on performance coupled with safety.

On a 100-kilometer (61 miles) drive from Coex in southern Seoul to Yangpyeong, Gyeonggi, on April 10, the new 3 Series roared past quaint country roads and highways with impressive performance only held back by heavy-handed technology.

First things first - the diesel 320d model driven in the test drive showed no sign of bursting into flames, avoiding the fate suffered by so many other BMW vehicles last year. As of this month, BMW has completed 94 percent of recalls of vehicles with the faulty exhaust-gas recirculation components that led to the fires.

Taking the new 3 Series through its paces, the vehicle produced an entertaining ride despite less-than-ideal driving conditions.

The new 320d model steered accurately through the winding roads of Gyeonggi despite the slippery surface due to rain earlier in the day.

Even during a stretch unexpectedly filled with snow at a higher elevation, the car performed confidently, sticking to the road without having to slow down to a snail’s pace.

The automaker said it lowered the model’s center of gravity by 10 millimeters (0.4 inches) and decreased the weight by up to 55 kilograms (121 pounds) compared to the previous generation to achieve the improved performance.

Braking through the empty, curvy roads was also enjoyable as the car responded immediately.

The emptiness of the countryside roads was key to the exciting driving experience. But when the quiet was replaced with busy multilane highways crowded with cars, the overbearing safety features took the fun right out of the 3 Series.

BMW incorporated a list of safety features such as lane departure and keep assist as well as city braking including collision and pedestrian warning to alert drivers of potential obstacles on the crowded roads in urban environments.

While lane keep assist worked perfectly well on the highways, the vibrating response from the steering wheel felt too heavy-handed.

At times, it seemed like it was necessary to resist the automatic correction from the vehicle as the response felt too strong to the extent that it took some of the driver’s confidence away.

Despite the feature, the vehicle accelerated swiftly thanks to the twin power turbo engine that boasts up to 190 horsepower and up to 40.8 kilogram-meter (295.1 pound-foot) in torque. The gasoline version of the 3 Series has up to 258 horsepower.

The seventh generation of the mid-size sedan also takes a new approach to design that BMW interior designer Kim Nury explained on the day of the test drive as focused on a theme of “precision and poetry” to evoke simplicity through strong lines.

While incorporating a bolder look with the sedan through wider chrome accents surrounding the signature kidney grille, the interior of the 3 Series incorporates a simplified look that the designer said was intended to create a modern feel.

Kim, who designed the interior of the new 3 Series, said, “We emphasized a simple but modern design through the restrained character lines.”

Explaining the cleaner look of the interior, Kim added that she hoped for even slimmer, streamlined designs.

“I wanted to make it even slimmer, but there are limitations as the airbag module would then need to be moved,” Kim said referring to the new narrow fascia. “The 3 Series [fascia] is as slim as it gets.”

While the 3 Series exudes a confident look with the bold design choices, at first glance, the chrome that emphasizes the kidney grille could look a bit over-the-top.

The interior has a clean look, but it also has design decisions that stray away from functionality.

The cup holders and a wireless charging pad in front of the gear stick can be hidden away with a cover. The sliding cover mechanism, however, slightly sticks out when uncovered, making it difficult to place your phone on the charging pad.

Nitpicking aside, the interior is spacious for a 3 Series as the length of the car has increased by 76 millimeters. While the second row is still a bit cramped compared to larger-size sedans, it is an improvement from previous generations.