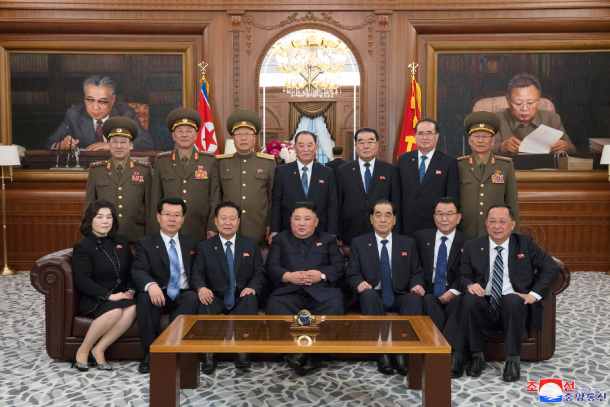 North Korean leader Kim Jong-un, center of front row, poses for a commemorative photo last Friday at the headquarters of the Workers’ Party’s Central Committee with newly-elected members of leadership groups of the party and state. [YONHAP]

Kim’s call, delivered in a speech to newly-elected members of the North’s rubber stamp legislature on Friday, was the most strident criticism of the Moon Jae-in administration to date, showing Kim’s growing frustration over Seoul’s standing by Washington as denuclearization negotiations crawl to a standstill.

“The U.S. is openly forcing the south Korean authorities to ‘control speed’ and moving in every way to subordinate the implementation of the north-south agreement to its policy of sanctions and pressure on the DPRK,” Kim said, according to an English-language report by the state-run Rodong Sinmun. The DPRK is an acronym for North Korea’s official name, the Democratic People’s Republic of Korea.

He continued, “I think that the South Korean authorities should come back to their stand at the time of the Panmunjom meeting and the September Pyongyang meeting and fulfill their responsibility before the nation […] if they truly wish for the improved north-south ties and peace and reunification.”

The South’s authorities “should not act an officious ‘mediator’ and ‘booster’ that adopt a vacillating stand depending on the trend and engage themselves in an array of visits,” Kim added, “but be a party advocating the interests of the nation with its own spirit and voice, being part of the nation.”

According to analysts, Kim’s words indicate his displeasure over the South’s reluctant decision to hold back economic exchanges with Pyongyang as a result of U.S. pushback.

State media reports on Kim’s speech were released by the North the day after Moon ended a summit with U.S. President Donald Trump in Washington Thursday in which they agreed to maintain a policy of top-down diplomatic engagement with the North in spite of the stalemate that has persisted for months, and particularly since the second U.S.-North Korea summit in Vietnam collapsed in February.

Moon was able to elicit a variety of positive signals from Trump, who said he has a “very, very good relationship with Kim” and that a “third summit could happen” between them that could involve “various smaller deals.”

But Trump also maintained his administration’s stance on pursuing a comprehensive, all-in-one deal for the North’s denuclearization and dashed any possibility of providing Pyongyang with economic concessions beforehand, like the inter-Korean economic projects which Moon had hoped to gain approval for.

With Washington stubbornly resisting an incentive-based diplomatic approach to the North, Kim’s speech on Thursday places further strain on Moon’s quest to reconcile the two parties, while making even harder his pursuit of a fourth inter-Korean summit possibly around the anniversary of his first meeting with Kim last April 27.

One silver lining for the South Korean president is that Kim affirmed he “maintain[s] good relations” with Trump and is willing to hold “one more talks” with the United States if it shows the “right attitude and comes up with a “mutually acceptable” deal.

Such a deal in Kim’s view would likely be a piecemeal approach in which it gains sanctions relief for dismantlement of some of the North’s nuclear facilities, not unlike the one he proposed in Hanoi. “Anyway, we will wait for a bold decision from the U.S. with patience till the end of this year,” Kim said in his address on Friday, “but I think it will definitely be difficult to get such a good opportunity as the previous summit.”

On Saturday, Trump appeared to reciprocate Kim’s openness to another meeting, writing on his Twitter account that “the term excellent would be even more accurate” to describe their personal relationship and that a third summit would be “good in that we fully understand where we each stand.” He reiterated the notion that “economic success and riches” lie in store for the North in the event of its denuclearization.

With Moon back in Seoul, the Blue House is likely to begin arrangements for a fourth inter-Korean summit by dispatching a special envoy to Pyongyang, possibly as early as this week. National security adviser Chung Eui-yong or National Intelligence Service director Suh Hoon are both prime candidates for the task, as they have acted in such roles in the past.