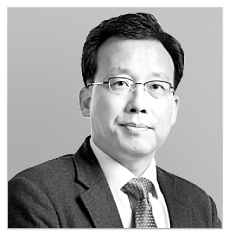 Chang Se-jung
The author is an editorial writer at the JoongAng Ilbo.

The Kim Dae-jung administration promoted “Dynamic Korea” as branding for the nation during the Korea-Japan World Cup Games in 2002. Koreans cheered in the streets and the Korean team reached the semifinals, going a long way toward improving the country’s image. That slogan was replaced by “Creative Korea” in 2016 during the Park Geun-hye presidency, but it is right to continue a project of promoting the nation’s dynamism and social and economic energy no matter who is president.

But only two years after the adoption of the new catchphrase, the country has rapidly started losing its vitality. Spring has come and flowers are blooming, but Korean society is feeling cold. Many people worry that it does not feel like spring even after it has arrived. Despite a season of energy, many people are disheartened.

The unreasonable economic and labor policies of the Moon Jae-in administration — such as a rapid hike in the minimum wage and a rigid implementation of a 52-hour workweek — are criticized for killing the liveliness of our society. Businessmen, workers, shopkeepers and microbusiness owners in Changwon, South Gyeongsang, and Gumi Industrial Complex in North Gyeongsang are all suffering.

Some small business owners and salaried workers are preparing a constitutional petition to challenge the legality of the state-enforced rapid minimum wage hikes and the 52-hour workweek. The Lawyers for Human Rights and Unification of Korea recently decided to file a petition with the Constitutional Court that the ordinances governing the minimum wage and the Labor Standards Act have infringed on workers’ rights to property, freedom of vocation, freedom of contract, freedom of corporate activity, physical freedom and right to labor, as well as the principle of proportionality.

Lawyer Jeong Seon-mi, who is working on the constitutional litigation, said 13 small business owners and workers have so far confirmed their intention to join the suit. “We will recruit more petitioners and file the suit in April,” she said.

The petitioners are ordinary folk, our neighbors. A man had to shut down his noodle shop after running it for seven years. A small manufacturer said his factory is about to shut down due to the minimum wage hike. Their stories are heartbreaking.

Wu In-sik, another lawyer involved in the constitutional litigation, relayed workers’ complaints about sharp declines in their monthly incomes after they were prohibited from working overtime shifts due to the rigid implementation of the 52-hour workweek. “In the past, workers complained about the companies’ violation of the statutory work hours, but these days, they want to work longer,” he said.
The 52-hour workweek also affected the news. When Gangwon was facing massive wildfires earlier this month, KBS, the main broadcaster of national disasters, failed to air proper reports as it was preoccupied with broadcasting propaganda for the administration and its staffers could not work thoroughly due to the 52-hour workweek cap.

The National Fire Agency issued a third-level warning, the highest countermeasure for a fire, at 9:44 p.m. on April 4. And yet, KBS only started its special report at 10:53 p.m., over one hour later. The emergency report stopped only after 12 minutes. Then it aired “Tonight, Kim Je-dong,” a controversial news show moderated by the liberal comedian.

A conservative labor union of the KBS said the public broadcaster decided to air the controversial show while viewers were panicking. “If ‘Newsline,’ a regular late evening news program, had remained in the timetable for the 11 p.m. slot, the public would have coped with the wildfire more effectively,” said a member of the union. “What were KBS President Yang Sung-dong and executives of the news bureau doing at the time?”

A KBS insider said, “The executives who are friendly with the administration focused their attention on programs to promote the government. Internal discipline collapsed after the 52-hour workweek was introduced. Amid such changes, we failed to establish a proper system to air a special disaster report at nighttime.”

President Moon fiercely criticized KBS during a cabinet meeting on April 9. “The main broadcaster of national disasters must play a role to offer information to make public safety a top priority,” he said.

KBS’s negligence can be attributed to its internal issues. But the Moon administration, which meddled with the system of public broadcasting, is also responsible. Before criticizing KBS, it must look back on itself first.

Although the minimum wage hike and the 52-hour workweek are killing the vitality of the country, the government is doing nothing. We need a wise government that can present energetic visions and goals to the people. We need a government capable of reviving the dynamic nature of the Korean people more urgently than ever.