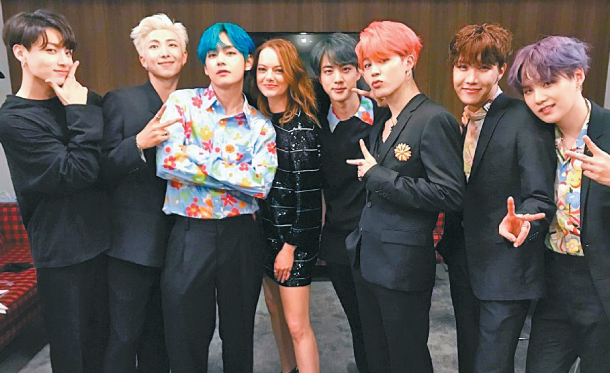 K-pop superstar group BTS continues to make history and set records with its latest release “Boy With Luv,” as it climbs music charts worldwide and announces more performances on the global stage.

The song ranked No. 3 on Spotify’s global chart released on Sunday - the highest-ever chart position for a Korean act on the international music streaming service.

The lead track of the group’s new EP “Map of the Soul: Persona” landed at No. 4 on Saturday’s chart and inched up a spot the day after. The rest of the songs from the EP all rank in the chart’s top 50.

The septet also shared the news of its upcoming performance at the 2019 Billboard Music Awards set to take place on May 1 at the MGM Grand Garden Arena in Las Vegas.

This is the third time the group has been invited to take part in the awards show and the second time they will perform on stage. They premiered their song “Fake Love” at last year’s show.

This year’s event will feature performances from Khalid, Panic! At The Disco, Sam Smith, Normani and Mariah Carey. The show will be hosted by singer Kelly Clarkson.

While “Fake Love” hit the threshold on Sunday afternoon, the news for “DNA” came early Monday morning, around 3 a.m.

The band currently holds the record for the highest number of music videos that have been viewed over 100 million times on YouTube, an astonishing 18.

The music video for “Boy With Luv” set the record for hitting the 100-million-view milestone in the fastest time ever - just 37 hours and 37 minutes.