‘Birthday’ wins weekend ahead of anniversary: Film about a family that lost a son in Sewol tragedy tops box office

‘Birthday’ wins weekend ahead of anniversary: Film about a family that lost a son in Sewol tragedy tops box office 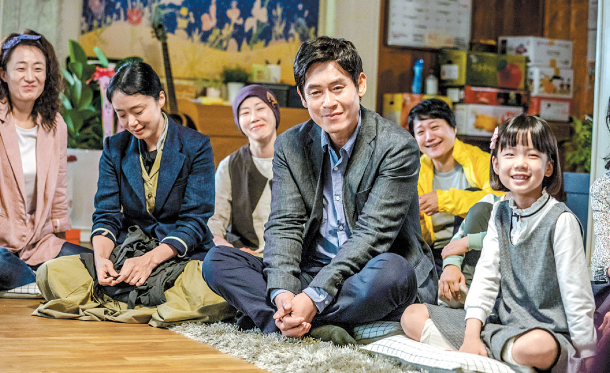 Ahead of the five-year anniversary of the Sewol ferry tragedy, “Birthday,” which tells the story of a family that lost their son in the incident, topped the weekend box office. [NEXT ENTERTAINMENT WORLD]


Today marks the fifth anniversary of the tragic sinking of the Sewol ferry. As if to commemorate the coming day, the top spot at the box office this weekend was taken by “Birthday.”

From Friday to Sunday, “Birthday” sold 231,000 tickets at 865 screens, pushing the film to the No. 1 rank from last week’s second place. According to the Korean Film Council, the film made up 21.9 percent of the weekend’s ticket sales.

“Birthday” takes place after the accident, and tells the story of a family trying to cope with losing their loved one. Although he is no longer around, his parents, played by actors Seol Kyung-gu and Jeon Do-yeon, decide to celebrate their son’s birthday with his friends to share their memories of him. 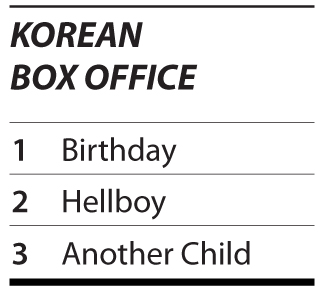 “Hellboy,” the third reboot of the character from Dark Horse Comics, fared nicely in its first week, selling 156,000 tickets at 726 screens. The film’s director, Neil Marshall, was behind “The Descent” in 2005, and more recently, two episodes of popular U.S. TV series “Game of Thrones” in 2012 and 2014.

Unlike the two previous iterations of “Hellboy,” this version is R-rated and doesn’t hesitate to include grim, gory and violent scenes.

Actor-turned-director Kim Yun-suk’s debut film “Another Child” managed to finish the weekend in the top three after its April 11 release. The film sold 114,000 tickets while playing at 673 screens. The film tells the story of how two families become interconnected when two adults become involved in an affair.

As the title suggests, the film humorously portrays adults childishly while their children end up being more mature than their parents. Although the situation is not a happy one, audiences seem to appreciate the director’s portrayal of the frailty and hypocrisy of adults from the children’s perspective.

Due to competition from new releases, “Money,” which was in the top three for three successive weeks, slid to fourth.

Superhero flick “Shazam!” had the steepest fall of the weekend, dropping from the top of last week’s box office all the way down to fifth.

To commemorate the anniversary of the Sewol incident, KBS1 radio (97.3 FM) will air a special documentary “Fifth Spring, First School Trip” (translated) at 11:30 a.m. and 9:30 p.m. today. The documentary follows a survivor of the tragedy as they venture to Jeju Island to complete the school trip that she was not able to go on with her friends five years ago. The documentary is narrated by singer Yozoh, who is also holding a photo exhibition in Jeju for the anniversary. The broadcast will also be available through the KBS application “KONG,” or “myK.”