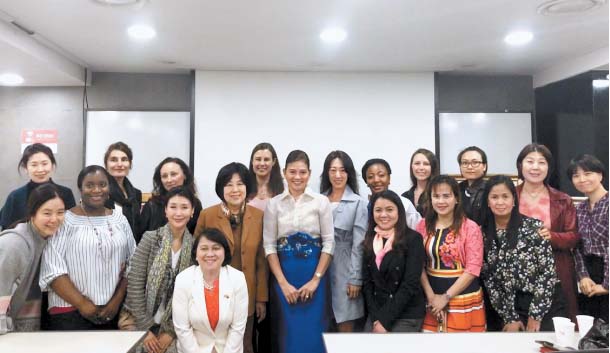 Ana Algabre Hernandez, wife of the ambassador of the Philippines to Korea, center, and members of the Seoul International Women’s Association pose together after Hernandez’s lecture “Fly High With a Purpose” in central Seoul on April 4. [ESTHER CHUNG]

No experience in life goes to waste, said Ana Algabre Hernandez, wife of the ambassador of the Philippines to Korea, as she reflected on her career as a flight attendant, wife and mother while being constantly on the move from one country to another.

“I was a flight attendant for about 20 years,” said Hernandez as she addressed the women gathered at Seoul International Women’s Association’s (SIWA) monthly Working Women’s Network meeting in central Seoul on April 4.

“We were trained for emergency procedures on board the aircraft, as well as in customer services - such as how to gracefully handle people who may be insulting you.”

With frank humor that made the room fill with laughter every now and then, Hernandez spoke to the women about some of the life lessons she learned from her flight attendant training.

“Part of the training that we have when we do emergency evacuation training is shouting - we are trained to shout for order,” she said, before surprising the women with a shout for order that is used on board by flight attendants when they have to evacuate the passengers.

“Sorry - don’t evacuate out of this room, please,” she said, smiling. “But why are we trained to shout like this? Because we have to control the crowd and prevent panic. Once you have the crowd under control, then you look at the window, evaluate the situation, and then decide what to do. When you have made a decision, then you act on it. Can you see how this is similar to what we do in life when we are faced with a problem?

“The entire training that I had was something that was very valuable, that I carried with me through life,” she said. “A lot of it at the time I did not think was useful, but they helped me become effective as the wife of a diplomat and as a friend, as a mother and so on.” 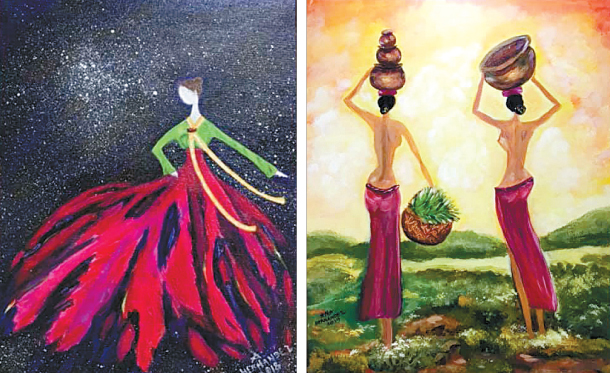 A lot of her experiences were valuable because they helped her help others.

“My talk, titled ‘Fly High with a Purpose,’ is about being the best version of yourself, so that you can become an inspiration to others,” she said. “Not for your glory but for the glory of God and so that we can help others for a deeper or a higher meaning in life.”

Not all her experiences were rosy. As she followed her husband to various postings around the world, it also meant coming face to face with certain stereotypes people had against Filipinos and against women.

“People do judge and that is the reality,” she said. “Just remember that however you are judged, it does not change who you are.”

After flying from city to city for some 20 years as part of the crew in Cathay Pacific Airways and supporting the mission of the Philippines in Hong Kong, The Hague, Vancouver in Canada and Xiamen in China, Hernandez said she found a new passion through expressing her experiences through paintings and poems. She brought a few of her paintings to her lecture on April 4.

“These three paintings here are part of the working women series of my paintings in which I depict women in the mountain regions of the Philippines,” she said. “The jars that the women carry in this painting are symbolic of the burdens that women are able to carry gracefully.”

Her paintings were displayed throughout March in the Philippine Embassy in Seoul to celebrate women empowerment. She donated a painting to the Asean-Korea Centre in central Seoul last month, and said she has plans to donate more to multicultural institutes before her mission here ends.

“Some of them were inspired by my time in Korea,” she said. “I am always humbled by the generosity of Koreans. I will miss the Koreans and the beautiful nature of the country.”

Hernandez is also the author of two books on flight attending, “Welcome Aboard: The Ultimate Flight Attendant Guide for a Successful Sky-High Career” and “Binibining Stewardess,” and is also an author of children’s stories.

A lot of the women attending her talk could relate to her stories as they also found work in Korea and adjusted to a culture that was once foreign to them.

“I was so glad to have been able to attend this talk as my husband is also a diplomat,” said Ruth Lazarus Kpasaba, a Nigerian woman who has been living in Korea for two years. “It was inspiring to hear from her and I especially loved the part of her talk about loving ourselves and cherishing friendships which are really important for women working abroad.”

SIWA’s next meeting of the Working Women’s Network will be about navigating LinkedIn, the organization said.