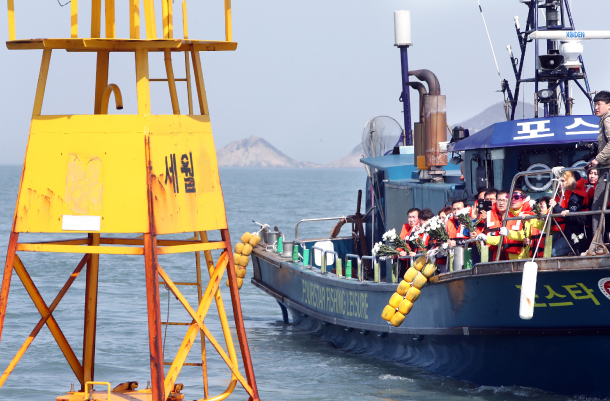 A host of events took place across Korea on Tuesday to mark the fifth anniversary of the Sewol ferry disaster, with crowds coming out to pay their respects to the hundreds who died in the tragic accident.

Ceremonies were simultaneously held in Seoul, Jeju, Busan and Incheon to remember the 304 people who died or went missing after the ferry, carrying 476 passengers, capsized and sank off the coast of Jindo County, South Jeolla, on April 16, 2014, in one of the worst disasters in Korean history.

At Paengmok Harbor in South Jeolla, a vigil was held inside the indoor gymnasium where the victims’ families stayed to await news of their loved ones aboard the ship. While 295 bodies were eventually recovered, dozens of family members stayed behind at the harbor for months waiting for authorities to retrieve the remains of their relatives.

Visitors also flocked to pay their condolences at nearby Mokpo New Port, where the Sewol was eventually laid after being lifted out of the sea three years after the accident in March 2017. In this process, authorities eventually identified the remains of four of the nine missing victims, but five still remain unaccounted for.

The biggest event on Tuesday, however, was held in Ansan, Gyeonggi. Danwon High School in Ansan lost 261 students and teachers to the disaster five years ago. Around 5,000 people attended the ceremony, including family members of the student victims and several top government officials, including Education Minister Yoo Eun-hae, Gyeonggi Gov. Lee Jae-myung and the heads of four political parties.

In Incheon, a separate ceremony took place to remember the other 41 victims of the accident, with around 300 people in attendance, including Interior Minister Chin Young and Incheon Mayor Park Nam-choon. The chairman of the main opposition Liberty Korea Party (LKP), Hwang Kyo-ahn, may have attended the event in Incheon due to the fact that civic groups, mainly led by the victims’ families, on Monday accused him of helping cover up the scandal as justice minister for the former Park Geun-hye administration.

Hwang, the groups argued, was one of 17 figures in the Park government who failed to prevent the disaster and tried to cover up the truth by systematically meddling with fact-finding investigations by a special commission from 2015 to 2016. Tuesday saw an outpouring of public calls both online and at the nationwide ceremonies demanding punishment for those responsible. Through a social media post on Tuesday, President Moon Jae-in promised there would be a process to uncover the truth and deliver due penalties for those accountable.

Prime Minister Lee Nak-yon followed this up in a speech in Sejong on Tuesday in which he warned “certain forces” to stop interfering with an ongoing probe by a second commission, which was launched in May 2017.

This newest investigation is currently looking into the circumstances behind the government’s delayed response to the accident and botched rescue attempts and whether there were systematic attempts by Park administration officials to tamper with subsequent inquiries or order surveillance into victims’ families, as was alleged by prosecutors who pursued top figures around Park.

As he was personally accused of wrongdoing, it was no surprise that Hwang received a bitter reception from the public in Incheon, with several people jeering him as he took the stage. But some of that public anger may also have been incited by the recent controversial remarks made by current and former LKP lawmakers about the Sewol disaster victims.

Former Rep. Cha Myung-jin, who wrote the that victims’ families were “really relentlessly leeching off” public empathy, and Rep. Chung Jin-suk, who wrote that he was “extremely disgusted” at the way the families were “repeatedly taking advantage” of the tragedy, both found themselves in hot water for their comments on social media. Some analysts say these comments may actually represent mainstream opinion in the LKP toward the accident.