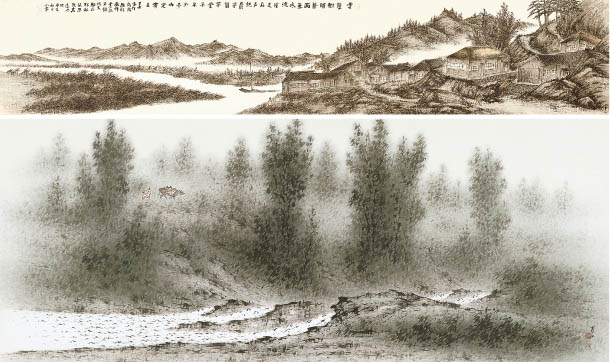 Hoping to appeal to contemporary audiences, museum curators often shy away from traditional Korean paintings when putting together exhibits, opting instead for the colorful brush strokes of Western-style art. But when putting together an exhibit to kick off a long series of events to celebrate their 50th anniversary in 2020, Gallery Hyundai chose to highlight two of the country’s top traditional artists.

“Two Great Artists of Korean Painting: Lee Sangbeom and Byeon Gwansik” opened on April 10 at Gallery Hyundai in central Seoul and will run until June 16.

While serene and soft works by artist Lee Sang-beom (1897-1972) gracefully sit in the main gallery, Byeon Gwan-sik’s (1899-1976) powerful brush strokes fill the gallery’s newest space - a stark contrast that will allow viewers to see the different sides of Korean art.

The exhibition is a celebration of not only the gallery’s 50 years of history, but also of Korean art as a whole. The exhibit aims “to remember the artists who left a clear footprint in the history of Korean art, but also to remind ourselves of the importance of traditional painting in the contemporary era.”

As visible in his works “Returning at Dawn” (1945) and “Forest Covered in Thick Fog” (1968), Lee is known for the way he builds up the scene with soft touches, giving a subtle and serene mood to all his paintings that the professor describes as “diligent.” Byeon’s works embody a more powerful force formed by bolder lines, as seen in “Samseonam Hermitage in Outer Mt. Geumgang in Autumn” (1959) and “Late Autumn of Nakdong River” (1971), but the two artists have been chosen because they developed their very own unique styles rather than following the then-popular Japanese painting style.

“There have been smaller exhibitions for [each of] the individual artists, but not one as big as this one, featuring the two artists at the same time,” said Song Hee-kyung, an art professor at Ewha Womans University who helped curate Lee Sang-beom’s art pieces. “Not many artists succeeded in breaking off from the Japanese style, but they managed to bring back the old method used in our history, in which we use multiple brush strokes to give depth.”

“China and Japan have intentionally heightened the value of traditional painting in their art markets,” said Lee Joo-hyun, a professor in the Korean art history department at Myongji University. “We in Korea, on the other hand, need to change the way we look at our modern art. Nobody will value our art if we do not value our own. I think in this day and age, the Korean art field needs to take a chance to rediscover the hidden beauties of our work. I hope this exhibition will open the doors to more opportunities.”