LG U+ looks for ways to draft drones into army

LG U+ looks for ways to draft drones into army 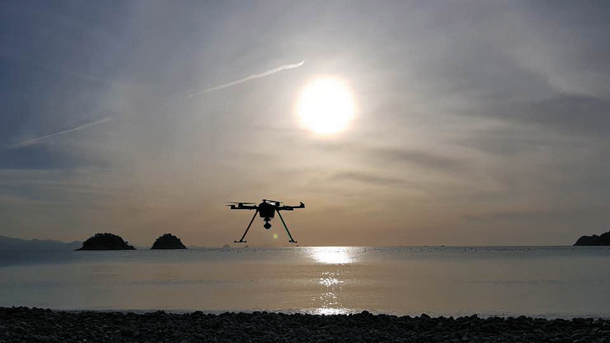 A drone flies toward the sea near Yeosu, South Jeolla, during a demonstration by LG U+ and the Korean military held Tuesday. [LG U+]

LG U+ has teamed up with the military to find new ways to use drones for national defense.

According to LG U+ Wednesday, it and the 31st Homeland Defense Infantry Division demonstrated the use of drones to support military operations in the sea near Yeosu, South Jeolla for 10 minutes on Tuesday.

Under the demonstration, a drone was able to spot an unidentified ship in Korean waters with two people on board using a thermal camera. The infantry division then sent out a warning message to the ship through a speaker mounted on another drone.

When the ship ignored the warning, the drones tracked it for about 300 meters (984 feet), supplying live footage of the scene to the infantry division’s headquarters in Gwangju, about 120 kilometers (75 miles) away. The infantry division cooperated with the maritime police to catch the ship.

LG U+ said a total of three drones were used for the demonstration.

Two of the drones were TB-504 models made by Unicorn of Smart IoT Service (Usis) based in Ulsan. The third, dubbed BlackCamel, is made by We Make Drone, based in Gyeonggi. The three drones each took on different roles including patrolling, filming and sending out audio warnings.

“The three drones moved at between 15-kilometer and 55-kilometer per hour speeds at least 50 meters above the sea,” the mobile carrier said in a statement. “As they were programmed to avoid collisions, the drones moved while keeping 10 meters distance between themselves.”

A spokesperson from LG U+ said the company and the infantry division has been testing the drones in diverse scenarios over the last month. During past demonstrations, drones patrolled inside buildings to spot explosive materials and followed a suspect vehicle running away, even attaching a GPS tracker to the car.

The 31st infantry division has been collaborating with the private and public sector as well the police to find ways to deploy drones in battle. The chief of the division touted the demonstration as a “successful result of collaborative efforts.”

Suh Jae-yong, vice president of LG U+’s enterprise 5G business unit, said once drones are able to operate on 5G, they will be more responsive in emergency situations and able to transmit high-quality video footage.