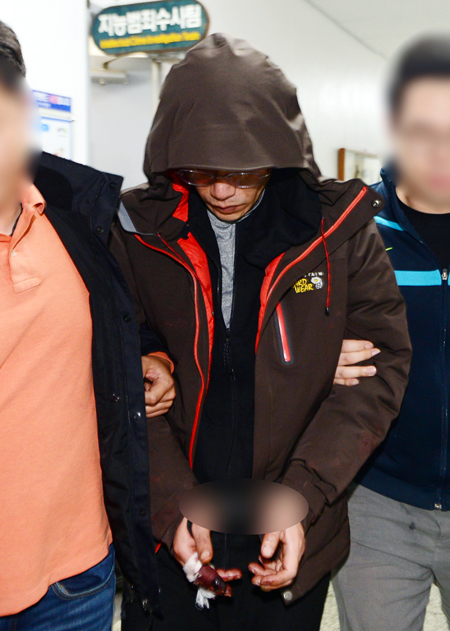 The suspect who allegedly set his apartment on fire Wednesday and stabbed neighbors who tried to flee, five of whom died, including a 12-year-old girl. [NEWS1]

A mentally troubled jobless man in Jinju, South Gyeongsang set fire to his fourth-story apartment well before dawn Wednesday morning and then stabbed neighbors trying to flee to safety.

The fire was extinguished about 20 minutes later by fire fighters.

A taskforce was set up by the Jinju Police Precinct to investigate the arson and murder case, including at least 39 officers from the Jinju police and seven officers from other local police branches. Nearly 20 other officers in charge of grief therapy and measures protecting victims were assigned to help the surviving neighbors.

Police said Ahn had a criminal record of physical assault. Last January, he punched a female employee at a company in South Gyeongsang he previously worked for, was arrested on spot, and ultimately fined 3 million won ($2,643).

A company representative told police that Ahn worked there last December and January. The job didn’t seem to go well but it was unclear if he was technically fired. After he left the company, Ahn returned one day and punched the female employee.

The relationship between Ahn and the victim was not explained. A company source said co-workers thought he had some kind of a mental problem after witnessing the attack.

It’s not clear whether Ahn was mentally ill, but an official from the Ministry of Justice disclosed that he went through psychiatric testing for nearly a month in 2010 at a forensic psychiatry institute in Gongju, South Chungcheong after committing an unidentified transgression. The result of that test was not disclosed.