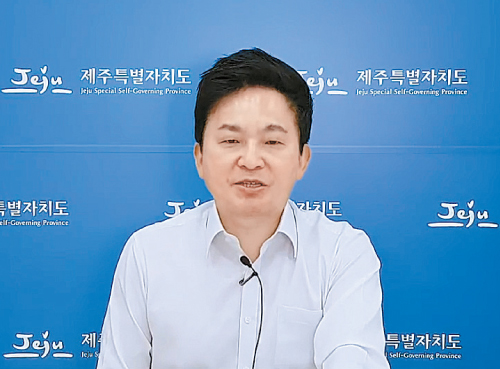 Jeju Island Gov. Won Hee-ryong criticized the government and asked for assistance from the Blue House and the Ministry of Health and Welfare after Korea’s first for-profit hospital lost its business license.

In a video on his YouTube channel Wednesday, Won said the provincial government is now burdened with managing Jeju Healthcare Town, dealing with lawsuits and paying compensation.

While it was Jeju that canceled the license, Won took aim at the passivity of the central government. He said it is important for the authorities to actively support the realization of the project, as the issue is connected to the competitiveness of the country’s medical industry, job creation and investments from foreign countries like China.

“The Blue House and the Ministry of Health and Welfare have merely spectated and avoided their responsibility,” Won said in the video. “Let’s put that behind us and work together to find responsible solutions for the future and heal our wounds from arguing against each other.”

The provincial government pulled the hospital’s business license yesterday, saying it had failed to meet the 90-day deadline for opening. The approval was originally granted on the condition that the hospital treats only foreign patients.

The real estate developer strongly opposed the conditions of the approval and requested an extension. Jeju stood firm on its approval conditions and refused to adjust the timeline.

The group could also file a lawsuit against Jeju seeking compensation. An attorney for the Chinese company argued in a hearing last month that his client lost a total of 85 billion won ($74.6 million) in building the medical facility and maintaining it.

It is even possible for the Greenland Group to use the free trade agreement (FTA) between Korea and China to get results. The attorney said in the hearing that Jeju’s conditional approval “was enough to hurt an investor’s reasonable expectations protected under the FTA’s investment pact.”