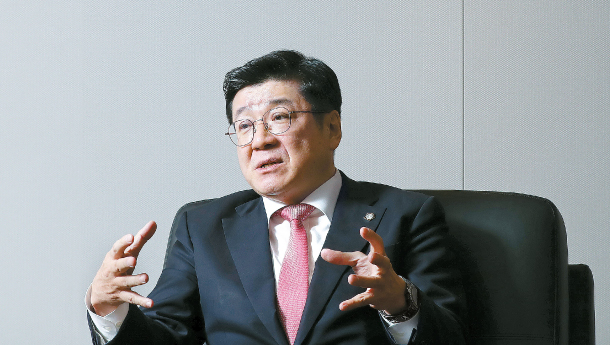 Lee Chan-hee, who was elected president of the Korean Bar Association last February, sits for an interview with the JoongAng Ilbo in his office in Seocho District, southern Seoul. [WOO SANG-JO]

Lee Chan-hee, who was elected president of the Korean Bar Association (KBA) last February, thinks “remnants of Japanese colonial rule” are holding Korea’s judiciary back, arguing that the country’s courts are plagued by elitism. That mindset, says Lee, is what eventually caused former Supreme Court Chief Justice Yang Sung-tae’s litany of alleged abuses during the former administration, which ultimately led to the public’s distrust of the judicial branch.

Lee, 54, says he hopes to change that while serving as head of the KBA by instilling a sense of humility within the country’s lawyers. The JoongAng Ilbo recently sat down with Lee to hear his thoughts on current affairs and how the KBA plans to overcome recent obstacles. The following are excerpts of the interview, which were edited and condensed for clarity.

Q. Last January, the Seoul Central District Court ruled that South Gyeongsang Gov. Kim Kyoung-soo was a principal offender in a major opinion-rigging scandal during the 2017 presidential election and sentenced him to two years in prison. The trial’s presiding judge immediately faced major backlash from Kim’s supporters, some from the ruling Democratic Party, prompting legal experts to accuse the lawmakers of violating the separation of powers.

A. I’ve had the chance to visit numerous courts around the world, and rarely do people hold protests around a court area or hold up placards throughout the entire year like Koreans do. I think it goes to show the social atmosphere in Korea that people don’t trust court rulings. Some protesters even hold up photos of the presiding judge and prosecutors, and that’s dangerous because it harms the public order of that community. The judiciary is entrusted by a country to serve as a dispute settlement body, and the premise of that is the public’s trust. The reason why there’s a three-trial system and a retrial system is to enable the judiciary to correct any mistakes from a lower court, if there are any, which is why it’s wrong that some lawmakers attack the judiciary every time a court hands down a ruling in a first or second trial. The foundation of democracy is the separation of powers, and if the principle of checks and balances fall apart, then it could turn into some sort of a kangaroo court.

Do you have a solution for that?

That’s why a judicial performance evaluation system that enables members of the public to assess judges should be introduced. All judges — not just some judges — should be publicly verified as being clean and fair in order for the judiciary to regain public trust. And for that to happen, the verdict of all first trials should be made public as well, so their transparency can be verified.

What do you think has put the Korean judiciary in jeopardy?

I think [Korea] has failed to wash out remnants of Japanese colonial rule (1910-1945), and the Korean judiciary has a lot of remnants, too. Elitism became rooted in Korean society during Japan’s colonial rule over the peninsula, leading to the formation of a privileged class. The best way to pick talented people from a mass population is to line them in the order of their grades [of a test]. And the moment that a small group of talented people pass that cut, they’re suddenly given great advantages in access to top positions. That elitism is what provoked the judiciary under former Chief Yang Sung-tae’s to abuse its judicial authority. The Korean judiciary has unconsciously indulged in such a culture to this day.

The KBA and Ministry of Justice are said to have been excluded from Yang’s drive to establish a new court of appeals because Yang was against both bodies.

There were various opinions on whether a new appellate court was a good idea or not. The problem was that [Yang] wanted to push through with establishing the court [despite opposing opinions] during his term so he could be remembered as the Supreme Court justice chief who made a grand achievement — but that actually wrecked the judiciary. Scores of judges were implicated in the issue and were impeached, penalized or indicted. Our society is now overcoming an event that’s never been heard of before, but the worst-case scenario would be such a case recurring in the future.

It’s necessary to reveal the truth in all three cases, from one point the public needs to know what happened and from another point [the truth should be] used to build a better society. I think the president’s comment, in that sense, was sort of a guideline for the investigations. It could’ve been an issue if he meant to pressure [the judiciary,] but I think he was just trying to show his resolve as the leader of a country. With the cases surrounding Kim Hak-eui and Jang Ja-yeon, it’s not like [Moon] ordered [the judiciary] to suddenly make something up that never occurred before. [Those two cases] were recently investigated by the prosecution’s committee for reviewing past cases. If investigations end here, various suspicions and conflicts derived from those cases will never stop. In order for Moon’s comment not to be perceived as pressure, investigative authorities like the police and prosecutors must deliver a good performance.

Opposition parties are against Moon’s order to reopen investigations into the cases, saying Moon is trying to score extra points for next year’s general election, because the figures accused of obstructing the probes in the past include the current chairman of the Liberty Korea Party, a vocal detractor of Moon.

It would be a problem if there was some sort of a political intention [behind Moon’s order]. But the public is wise. If they judge something is unnatural, they will reflect their thoughts in next year’s general election.

The judiciary appears to be worn out by Moon’s drive to pluck out so-called deeply-rooted evils, or jeokpye, from Korean society.

The problem is that the current government suddenly seized authority without being fully prepared for it after the former [Park Geun-hye] government collapsed. It’s not easy to cut connections from the past. I think the bigger issue nowadays is the sluggish economy. And on top of that, we’re experiencing a stalemate on the North Korea denuclearization issue.