Ji Eun-hee just misses out on win at Lotte

Ji Eun-hee just misses out on win at Lotte 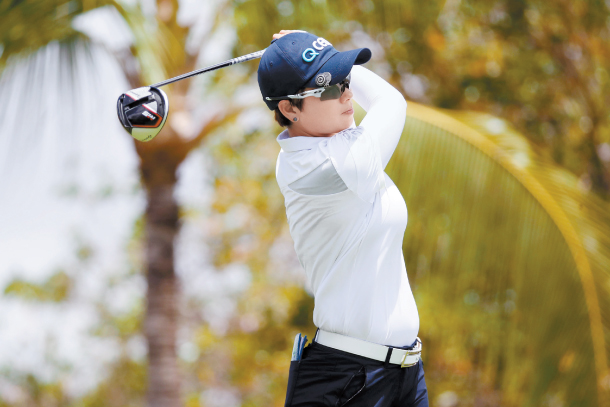 Ji Eun-hee watches her drive during the final round of the Lotte Championship at the Ko Olina Golf Club in Hawaii on Saturday. [GETTY IMAGES/YONHAP]

Ji Eun-hee hoped to become the second Korean golfer to ever win the Lotte Championship, but despite Korea’s dominance of the LPGA this year, Ji had to settle for second place at the Ko Olina Golf Club in Kapolei, Hawaii, on Saturday.

Playing in strong winds, Ji wasn’t able to make any more birdies throughout the round. In the remaining 12 holes, Ji added another bogey on the par-5 13th to finish four shots behind the winner, Brooke Henderson of Canada.

As Ji played one group ahead of the final group, she was ranked fourth in the standing once she signed her scorecard. Yet as Ariya Jutanugarn of Thailand made a double-bogey and Nelly Korda of the United States made a quadruple by hitting into the water twice on the final hole, Ji jumped up to second.

Henderson shot two-under par in the final round to win the tournament at 16 under par, successfully defending her title. By winning the tournament, Henderson tied the record for LPGA Tour wins among Canadian golfers.

This season, Ji is the oldest Korean golfer competing on the LPGA Tour, at 32. Playing her 13th season on the Tour, Ji is proving she’s still got what it takes. She started the season by winning the season opener, the Diamond Resorts Tournament of Champions presented by Insurance Office of America, in January to pick up her fifth LPGA Tour victory.

By winning the season opener, Ji became the oldest Korean golfer to ever win an LPGA Tour event. The record was previously held by Pak Se-ri, who won the 2010 Bell Micro LPGA Classic at 32 years and eight months old.

The Lotte Championship, which was established in 2012, hasn’t been the best tournament for Korean golfers as Kim Sei-young is the only one to have won it in 2015. This year, Kim finished tied for 62nd by shooting two over par on the final day.

Although Korean golfers failed to get on a winning streak, they are having another strong season on the LPGA Tour, having won five out of nine tournaments so far.

The LPGA Tour will continue its season at Hugel-Air Premia LA Open in Los Angeles starting from Thursday to April 28.