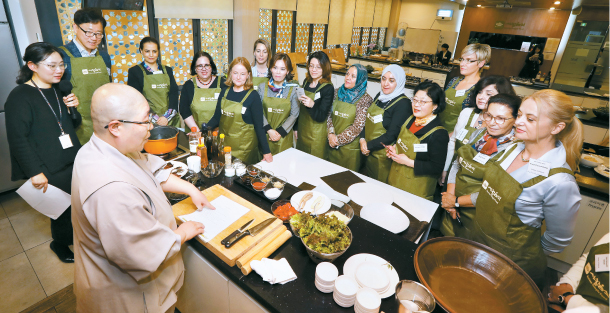 Discovering the diverse vegetables available in Korea was one of the many things that members of the diplomatic corps here learned while they learned to cook the food that Korean Buddhist monks eat on Thursday at the Korean Temple Food Center in Jongno District, central Seoul.

Fourteen guests and Kang Nan-hee, wife of Seoul Mayor Park Won-soon, gathered for an event put together by the Korea JoongAng Daily and the Cultural Corps of Korean Buddhism to learn more about a style of Korean food that’s recently been getting attention around the world. Under the guidance of Dongwon sunim, they got to make two dishes while learning about the ideas that are fundamental to temple food culture.

“Everybody who visits Korea from back home definitely has a plan to visit a temple,” said Amal Nosseir from Egypt. “They all want to know more about what the food is about, and want to eat it.”

One of the biggest reasons why many people are curious about temple food is because they think it is healthy. The diet excludes meat, garlic and ingredients known to boost energy. Vegetables are the most common ingredients, and since monks do not add much seasoning to their food, many see the cuisine as a great diet option. To monks, Dongwon sunim explained, being healthy is about more than just food. She encouraged participants to try and think beyond what’s healthy and tasty when it comes to food.

In top photos, guests from 14 different embassies in Korea, including Egypt, Belgium, Romania, Brazil and Cote d'Ivore, try cooking temple at the Korean Temple Food Center in Jongno District, central Seoul. CEO Ryu Kwon-ha of the Korea JoongAng Daily, above left, and Kang Nan-hee, wife of Seoul Mayor Park Won-soon, above center, pose with Maria Ana A. Hernandez of the Philippines, for a photo during the event. [PARK SANG-MOON]

The dishes the participants made were deodeok chapssal gui, or grilled bonnet bellflower root, as well as ssuk injeolmi, mugwort rice cake. It took less than an hour to make both dishes, which amazed many of the participants. The injeolmi with mugwort, the monk explained, is something people eat on the first day of spring, when the weather gets warmer.

Although its known as a fall dish, the flavors of the deodeok are deepest and the most concentrated in the spring, after the root has endured the winter. It can be a side dish to a savory meal or even a tea snack when added with drizzle of honey.

“Back home in Romania, it takes a long time to prepare dishes, because meat is the main ingredient that takes time to cook, and the vegetables are something that go on the side,” said Kloos Flavia Athena, the spouse of the ambassador of Romania, who tried cooking temple food for the first time after try eating it several times. She particularly liked the deodeok dish for its taste and simple recipe. It was her first time trying the particular root vegetable, and she said she took a photo of it to show at her local supermarket so that she can buy it.

“I will cook this at home, because it is very delicious, and so easy to cook. You prepare [it] for like five to 10 minutes, and within 30 minutes you can have all these foods!”

Many of the participants agreed that discovering new items like ssuk and deodeok was the most interesting part of cooking together Thursday. Even if they wanted to try something new by picking it up at the market, chances are they wouldn't know how to cook the local ingredients, so they stayed away from buying items that looked foreign to them.

“Temple food is special, because the vegetables used to make it [are] all Korean ingredients,” said Malika Khadhri Ep El Abed, spouse of ambassador of Tunisia to Korea, while pointing out that there are many imported foods available in Korea, which sometimes makes it difficult for her to check what’s local. “When would I get to really learn more about the local ingredients?”

In Southeast Asia, monks get food donated to them by others and have to eat the food they get - even if it includes garlic or meat, which the religion forbids them from eating. In many countries of that region, it is common to see monks coming to town and neighbors meeting them to give them food.

However, Korea’s Buddhist food culture developed differently. Korean Buddhism came from China, where it was difficult to spread the word to neighbors that monks needed to get food because it was an uncommon practice, according to Dongwon sunim. Monks in China started making their own food and saw cooking as part of practicing Buddha’s teachings - an approach that carried over to Korea. In fact, the word temple food isn’t a term that monks ever use. To them, each meal is called gongyang, a term people use to describe a meal. Only recently, when outsiders started to learn how food is consumed at temple, did the term become common.

Since there are fewer ingredients to cultivate and gather during the winter, monks had to find ways to collect as many vegetables as they could while they were in season, in order to get enough nutrition at the temple in the colder months. Developing skills of storing vegetables for long periods of time by drying them and using the sauces that have been fermented and aged for years in big jars were done out of necessity.

“Now with better technology, we have a refrigerator where things can be stored at low temperatures, but back then, all we had was salt to preserve food ingredients,” said Dongwon sunim, adding that it was inevitable for each temple to master its own recipes of traditional Korean seasonings called jang. Monks used jang, such as gangjang, or soy sauce, and deonjang, or fermented soy bean paste, to add more flavors to the dried vegetables.

Many classes are offered on a regular basis at the Korean Temple Food Center. One class is offered in English every week, from 10:30 a.m. to 12 p.m. on Saturdays. Each class costs 10,000 won ($8.80). It is also possible to make a group reservation in advance and inquire about a special group class taught in English or other languages.

There are some cooking utensils and ingredients available on display at the center to help people understand kitchens used to be like, or still are, at temples across the nation. 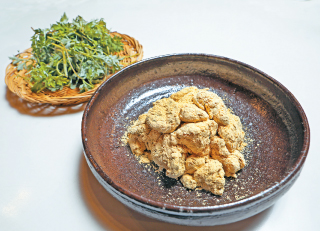 2. Place pre-soaked rice in a steamer basket and steam it (with plenty of water) for 30 minutes. Let the rice sit for 10 minutes without opening the lid.

3. Pour salt water over the rice while steaming it.

5. Put enough water into a pot and add one pinch of salt. Then blanch the washed mugwort.

6. Rinse it with cold water and squeeze out excess water. Then cut it into several pieces.

7. Put the cooked rice and parboiled mugwort into a wide bowl and pound them with a wooden pestle.

8. Shape the pounded rice dough coat with roasted soybean powder and serve it in a plate. 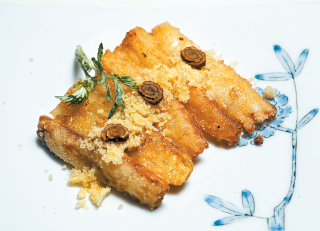 1. Peel off, wash and cut deodeok into 5 centimeter pieces.

2. Then soak it in salt water in order to remove bitter taste.

3. Cut the cleaned deodeok in half, flatten it with a rolling pin and get rid of water.

4. Coat the dry deodeok with rice powder and grill with oil.

5. Take out the seeds from dates and slice them into thin strips.

6. Apply honey on prepared deodeok, then decorate with strips of dates and sprinkle pint nut powder to serve.

For more information about participating in a cooking class, go to www.koreatemplefood.com or call (02) 733-4650.