[Disrupted Finance] If you can’t beat them, collaborate with them

[Disrupted Finance] If you can’t beat them, collaborate with them 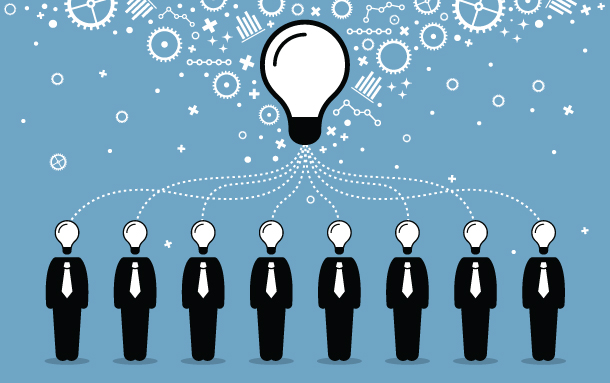 Money transfers and payments have long been domains of established financial institutions, but high-tech start-ups have been making moves in recent years.

Instead of trying to take the new players on head to head, some banks have opted to work with them. To stay relevant and competitive, they are opening so-call accelerators.

In arrangements of this type, the banks typically provide space or support - technical and financial - to allow for the development and testing of new financial services. The fintech companies are given a timeline to demonstrate progress.

The relationships may bring the Silicon Valley spirit to institutions that have long been more conservative and defensive than innovative. The entrepreneurs could help the banks update their corporate cultures, vital if they are to thrive in future.

From the point of view of the start-ups, the benefits are more obvious; they get the opportunity to test their products and gain some publicity.

The country’s major banks, including Woori Bank, NongHyup Bank and Shinhan Bank, are becoming particularly aggressive in developing their incubators, accepting large start-ups and increasing their financial commitment. Their efforts are in line with the government’s support of high-tech companies.

From start-up to scale up

Until now, the programs offered by big financial institutions have been more or less the same in terms of work space and consultation services.

But now, some are upping their games.

Woori Bank is pushing the boundaries with the aim of generating more business-oriented results.

In its DinnoLab, which opened earlier this month, not only does the bank offer space, but it also lets select fintech players test their service on Wibee Bank, Woori’s app.

ATSoft, a developer of an electronic Braille solution, is one of the first 10 start-ups in the DinnoLab program.

“Many start-ups would stumble or be forced to close even before they test their products or services in the market because of the lack of money and resources,” said Park Ho-sung, founder and CEO of ATSoft, after an opening ceremony of the center on April 3. “But I applied to DinnoLab because it offers a chance to actually experiment and put our product to the test to see if it really works.”

He said he expects the solution to be used on the Wibee Bank platform.

Infosonic is another DinnoLab participant. It has had an opportunity to partner with other banks, such as Shinhan Financial Group and Hana Financial Group, in similar programs.

“There are many accelerator programs out there,” said Cho Hoon-taek, CEO of Infosonic. “But the unique feature of DinnoLab is that it helps us demonstrate our service to potential users.”

Infosonic is developing a mobile payment solution based on sound waves. The technology is able to process transactions more quickly than near-field communications and QR code-based payments.

Located in Yeouido, western Seoul, DinnoLab has meeting rooms and a place for video recording. It also provides consulting services and will link a participant to Amazon Web Service platforms.

Woori has had some success in collaborating with young high-tech entities before. It was able to implement an iris scanning authentication system in 2016 by investing 1 billion won ($879,660)in a biometrics start-up.

The bank’s fintech initiative is an important part of its digital strategy, said Hwang Weon-cheol, chief digital officer at Woori Bank in an interview with Korea JoongAng Daily.

“More customers find value in services provided by fintech companies,” Hwang said. “Banks need to admit to the facts and learn from them in order to improve the customer experience.”

He said that some thought needs to go into developing the alliance between big banks and fintech firms.

“There are a bunch of working spaces out there offered by both the government and private institutions,” Hwang said. The problem for start-ups is not the lack of space “but lack of opportunities to bring their products to the users.”

The latest version of Wibee Bank is designed to display services from different fintechs on a separate page.

“The app will feature the fintech services only after they pass a screening to filter out any of them violating the laws or not protecting consumers,” he said. 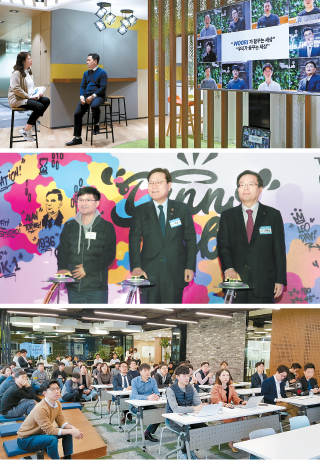 NongHyup Bank is trying to carve out its own niche by inviting the start-ups specializing in farming businesses, as the bank is a financial institution for agricultural cooperatives.

Xbarx (pronounced ex bar ex) was one of the 33 finalists to be chosen for the NH Digital Innovation Campus. It is focused on the distribution of agricultural products.

“Our Orderplus platform connects restaurant owners with agricultural and fisheries retailers so that the owners can order ingredients in bulk,” said Park Sang-jin, CEO of Xbarx.

“So, we have many potential areas of cooperation with NongHyup, with its vast network of farmers and distribution channels,” Park said.

NongHyup is not limiting itself to farming-related business. It has also brought in enterprises involved in artificial intelligence, big data, cloud computing and blockchain.

The NongHyup Financial Group, the bank’s holding company, said that it will create a 20 billion won venture fund and prioritize the campus members for financing.

“The registered start-ups are entitled to 30 million won of seed money if conditions are met,” said Kim Do-kyeong, manager at the NH Digital Innovation Campus.

Connexus, an operator of an e-commerce platform focused on agricultural produce, is among the beneficiaries.

A total of 190 companies competed to land a slot in the center, located in Yangjae-dong, southern Seoul.

Shinhan offers advising and financial support in a number of categories, including initial public offerings, overseas business and human resources.

“Until now, the start-up support center’s offerings have been rather fragmented,” said a spokesperson from Shinhan. “But by dividing the categories and matching appropriate experts, we are able to provide more relevant consultancy.”

So far, Shinhan has supported 71 start-ups through the Future’s Lab.

The financial institution sometimes encourages alliances rather than working alone.

Shinhan Card, an affiliate of Shinhan Financial Group, formed a partnership with Visa Korea to promote the fintech industry and start-ups in Korea. Under the agreement announced last week, the two will jointly operate a start-up incubating program - ‘I’m Ventures with Visa’ - with Visa Korea.

The government is taking great interest in these projects. Choi Jong-ku, Financial Services Commission chairman, was present at all the opening ceremonies of the banking group accelerators.

It is also granting key permissions.

Those firms will cooperate with financial institutions, such as Shinhan Card, the Industrial Bank of Korea and Hyundai Marine & Fire Insurance, to provide unsecured and short-term loans based on new evaluation methods.

In an earlier September 2018 round, 11 fintech companies were matched with major financial companies, including KEB Hana Bank and Woori Bank. The list of fintechs included Big Value, which specializes in real estate evaluation, and Aizen Global, an AI financial platform developer,

“Advanced financial technologies, or fintech, are taking the lead in enhancing financial service,” Choi said at a finance conference last week. “The FSC will let major banks open payment systems to fintech companies so that the public can get access to a wide range of services via one application.”

An open application programming interface will allow anyone to interface with the systems of the financial institutions directly, without paying a fee or signing a service contract. This reform will create a level playing field for start-ups, entrepreneurs and others. Another area of focus is the deregulation of financial services, as the sector is heavily regulated in Korea. Possible liberalizations include app-to-app payment systems, where purchases can be made without going through credit-card networks.

As the process of amending the law takes time and political wrangling, the authorities have created regulatory sandboxes, lifting the rules for technology testing purposes. In January, 88 companies lodged applications for 105 proposed services.

The selected firms will benefit from regulatory exemptions to test and market their services.