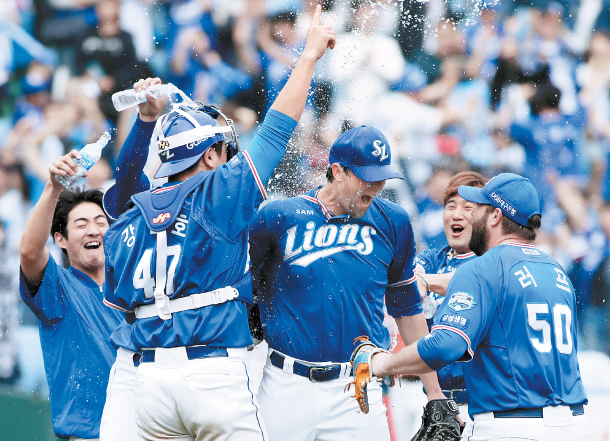 Samsung Lions players congratulate Deck McGuire, center, after a no-hitter during a game against the Hanwha Eagles at Hanwha Life Eagles Park in Daejeon on Sunday. [KIM SUNG-TAE]

The 2019 KBO season may have started just a month ago, but it’s already proven to be one for the record books. Samsung Lions pitcher Deck McGuire is the latest player to earn his spot in history this season, becoming the first pitcher to toss a no-hitter since June 30, 2016.

The Lions finished their weekend strong, defeating the Hanwha Eagles 16-0 at Hanwha Life Eagles Park in Daejeon. It was a good redemption for the Lions, as they’d lost the first two games in the weekend series. For McGuire, it was a historic game. The first-year foreign pitcher not only became the 14th pitcher in the KBO to ever toss a no-hitter, but also the first one to ever do so in his first ever KBO win.

Throughout nine innings, McGuire gave up only one walk and a hit by pitch while striking out 13. This is an impressive record as the Eagles had the second best batting average, at .282, as of Saturday’s game. McGuire tossed 128 pitches.

Having scored a run at the top of the second inning, the Daegu club exploded in the fourth inning with seven more runs. The Lions continued to roar through the next three innings, scoring another eight innings.

While McGuire fulfilled his duty on the mound, the Lions’ batters also supported him with an impressive 23 hits, setting a record for the most run supports in a no-hitter game.

“I really want to congratulate McGuire’s no-hit, no-run,” said Lions manager Kim Han-soo. “This is probably the best day of his life.”

Prior to McGuire’s game on Sunday, his first season in the KBO hadn’t been great so far as he struggled to pick up a win. In his first five games in the KBO, McGuire had a 6.56 ERA.

As the Lions haven’t been too successful with foreign pitchers in recent seasons, McGuire’s struggle was another disappointment. However, right when it seemed like he might be yet another foreign pitcher passing through the revolving doors of Lions starters, McGuire made it clear he deserved a spot on the team.

Now that he has finally picked up his first win in the league, McGuire has up one win and two losses with a 4.73 ERA in six games.

Although there have been 13 other pitchers to toss a no-hit, no-run game in the KBO, McGuire is the first to pick up his first win in the league off a no-hitter. Before McGuire, the most recent no-hitter game was pitched by Michael Bowden, formerly of the Doosan Bears, on June 30, 2016, against the NC Dinos.

After playing college baseball for Georgia Tech, McGuire was drafted in the first round of the 2010 MLB draft by the Toronto Blue Jays. Although he signed with the Jays for a $2 million singing bonus, McGuire wasn’t able to make his big league debut for the team.

It wasn’t until September 2017 that McGuire finally made his big league debut for the Cincinnati Reds. Following McGuire’s debut with the Reds, he played for the Jays and LA Angels before joining the Lions.

Throughout his career in the United States, Mcguire picked up a win and three losses in 27 games with a 5.23 ERA. In the minors, he picked up 61 wins and 72 losses with a 4.31 ERA.

Over the weekend, there’s been some changes in the regular season standing, especially at the bottom of the table. The KT Wiz is finally out of last place after taking a series win against the Lotte Giants 2-1. With two wins over the weekend, the Wiz is only 0.5 games behind the eighth ranked Lions.

As the Wiz avoided the bottom spot in the standing, the Kia Tigers are now the last team. The Tigers had a rough week, losing all six games. The Tigers were swept by the Giants during the week and then by the Bears over the weekend. This is the first time since May 23, 2008, that the Tigers have dropped all the way to the bottom of the standing.

The Bears have now extended their lead at the top of the standing by 1.5 games ahead of the SK Wyverns. As the Wyverns took their series against the Dinos 2-1, three teams - the Kiwoom Heroes, LG Twins and Dinos - are tied for third, three games behind the Bears. The Eagles and the Giants are tied for sixth.

Starting today, the 10 KBO clubs will continue their season with another three-game series. At Jamsil Baseball Stadium in southern Seoul, the Twins will face the stricken Tigers, while at Gocheok Sky Dome in western Seoul, the Heroes will host the Bears. In Suwon, Gyeonggi, the Dinos will play against the Wiz, while in Daejeon, the Eagles will host the Giants. In Daegu, the Lions will play against the Wyverns.