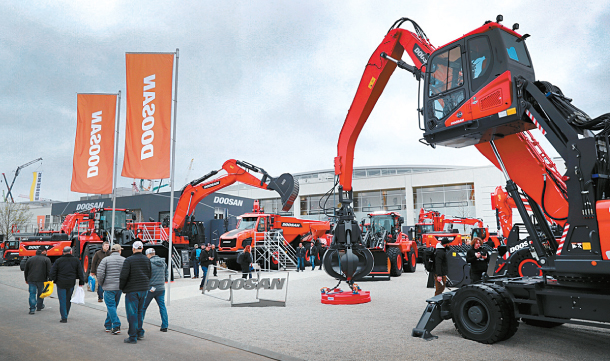 Doosan Infracore introduces its products at Bauma 2019 in Munich on April 8. [DOOSAN INFRACORE]

Construction equipment maker Doosan Infracore announced Monday that it brought in roughly 200 billion won ($175.2 million) in revenue from its North American and European businesses in the first quarter this year, growing by 14 percent on year.

The company said that while construction equipment market in those markets expanded by roughly 5 percent over the last year, Doosan’s sales were able to beat the market growth rate due to “its aggressive marketing strategy” in a statement.

The Doosan affiliate has been expanding the dealer network in North America and also in European countries, including the Czech Republic, Italy and France.

Earlier this month, Doosan also opened up a new parts distribution center in Seattle. Doosan said the distribution center will help supply heavy equipment, such as excavators and wheel loaders, in a timely manner to its local customers. The center is the third in the United States, built after existing centers in Atlanta and Miami.

To further strengthen its presence in the North American and European market, the Korean company vowed to add customization centers in those regions. The center assembles half-finished goods sourced from Korea into a final product customized for local customers. While there is one in Europe, there are none in North America.

The company is upgrading its European facility so larger construction equipment can be assembled there. In North America, the company is planning on establishing one customization center by the end of this year.

“We are on track to meet our 840-billion-won sales target for the two markets this year,” a press officer from Doosan Infracore said.