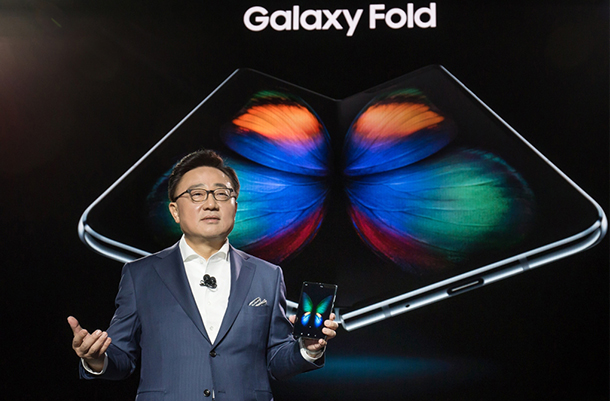 Samsung Electronics President Koh Dong-jin introduces the Galaxy Fold during an unpacking event on Feb. 20. The device was set to release in the United States this Friday, but the launch has been posponed. [SAMSUNG ELECTRONICS]

Samsung Electronics has postponed the release of its Galaxy Fold, the company announced Tuesday.

The decision follows a series of reports from U.S. tech reviewers last week reporting that their device’s screen was faulty.

“To fully evaluate this feedback and run further internal tests, we have decided to delay the release of the Galaxy Fold,” Samsung said in a statement Tuesday. “We plan to announce the release date in the coming weeks.”

The company had the faulty devices shipped to Korea over the weekend for closer inspection. Initial findings were that faults in the folding display “could be associated with impact on the top and bottom exposed areas of the hinge.”

One faulty device was found to have “substances inside the device that affected the display performance,” according to Samsung.

The company said it will take appropriate measures to overcome these issues. It also added that it would provide better instructions with the device, including that a protective film on the screen should not be removed.

Some of the reviewers that reported faulty screens last week had removed the film, thinking it was temporary. Samsung says the film is a permanent component that must stay on the screen.

The Galaxy Fold was supposed to start U.S. sales this Friday. Domestic sales were set to take off next month and on May 3 in 15 countries in Europe.