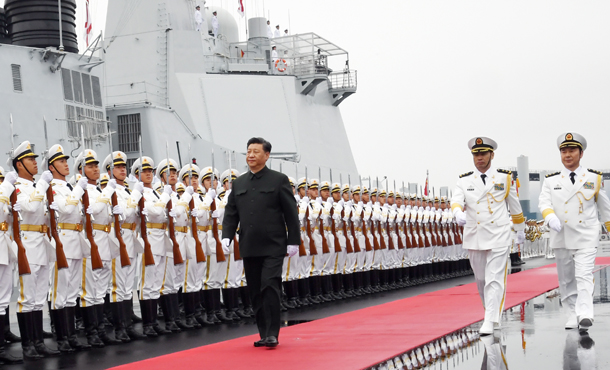 China set out on a full-fledged naval expansion after the 1991 Mount Pinatubo volcano eruption in the Philippines. The U.S. Naval Base in Subic Bay and the Clark Air Base were buried under volcanic ash. The United States gave up on the two bases. To China, the surveillance sites nearby suddenly disappeared. China unilaterally announced a territorial claim over 80 percent of the South China Sea and quietly began to build up naval strength.

China’s pursuit of naval emergence was revealed after 15 years. In 2006, a U.S. fighter jet undergoing exercises with the USS Kitty Hawk in the Pacific found a periscope in the sea. An indigenously developed Chinese submarine passed through the U.S. Navy’s surveillance and approached the Kitty Hawk. Taken aback from the incident, the United States monitored the moves of China with an ocean surveillance ship.

China used fishing boats to interfere with a U.S. surveillance ship, which withdrew in the end in the USNS Impeccable incident from 2009.

China continued to augment its marine power. It purchased an aircraft carrier from Ukraine to convert it into a floating casino, but it was refitted into an aircraft carrier. It is the Liaoning, which was presented in Tuesday’s naval review to mark the 70th anniversary of the founding of People’s Liberation Army Navy. Naval vessels from more than 10 countries, including Korea, participated in the event, while the United States did not send one. The background reflects discontentment in the United States over China’s maritime challenge.

Korea also needs to be wary of China’s rise in the ocean. While there are subtle differences in interpretations, many see that the First Island Chain — China’s maritime line of defense — includes the Korean Peninsula and nearby seas.

It means that China has set the areas surrounding the Korean Peninsula as “a sea that China needs to protect.” This is the justification for China to designate the area above Korea’s Ieo Island as its air defense identification zone in 2013. There are concerns that China will attempt to control maritime trade routes once it has marine hegemony. I wonder how the Korean government is preparing.