[REVIEW] “Avengers: Endgame” is a spectacular final chapter: The highly-anticipated Marvel flick is an exciting final piece in a well-written puzzle

[REVIEW] “Avengers: Endgame” is a spectacular final chapter: The highly-anticipated Marvel flick is an exciting final piece in a well-written puzzle 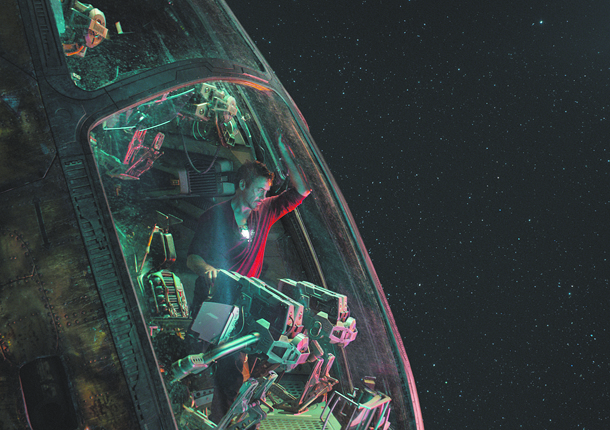 In a scene from “Avengers: Endgame,” Tony Stark, played by Robert Downey Jr., looks out from a spaceship after his encounter with the supervillain Thanos. [WALT DISNEY COMPANY KOREA]

The highly-anticipated “Avengers: Endgame” is finally here, and more than two million people in Korea who helped make local cinematic legend by smashing ticket presale records have started to fill theaters nationwide. At this point, it would seem that admission number can also surpass the legendary two-million mark given over one million people had already seen the film in the mere 4 hours and 30 minutes after the film’s release on Wednesday morning, based on Korean Film Council data. Never before has such a feat been achieved in such a short time frame in local box office history.

Most Marvel fans are already aware of how things are going to pan out: ultimately, the supervillain Thanos will be defeated by the Avengers. Yet the big question remains: How will that happen? According to what Doctor Strange foresaw with his Time Stone in “Avengers: Infinity War” (2018), the chances of the heroes winning were one in 14,000,605. Pretty slim odds, but what would a superhero movie be without suspense?

To answer the question on every soon-to-be moviegoer’s mind: Yes, you can watch the entirety of the 3-hour-long film without a bathroom break. This reviewer made it, but only thanks to a lot of preparation and multiple visits to the bathroom throughout the day prior to the screening. Make sure you visit the toilet before the movie starts so that you don’t have to worry about missing a second of the movie. When the ending credits start rolling, you will thank yourself for having made it the whole way through.

Disappointingly, Marvel’s famous post-credit scenes don’t appear at the finale of “Endgame,” a sign that this really is the end of the journey for many of the heroes. It would have been wonderful if everyone could have survived their journey to defeat Thanos, yet there can’t possibly be a completely happy ending where everyone survives and gets to go back home to their friends and families — Marvel fans know better than that, and so does Thanos: he’s too strong to be defeated without any sacrifices.

Speaking of the superheroes, the actors played their individual roles perfectly as always, adding touches of humor here and there despite a mostly grim set of circumstances. What was most intriguing about the film’s humor was that directors Anthony and Joe Russo actually took heed of jokes that were popular among audiences and the actors, and used them in the plot, making the film even more enjoyable for die-hard Marvel fans who have poured over every interview with the film’s stars. 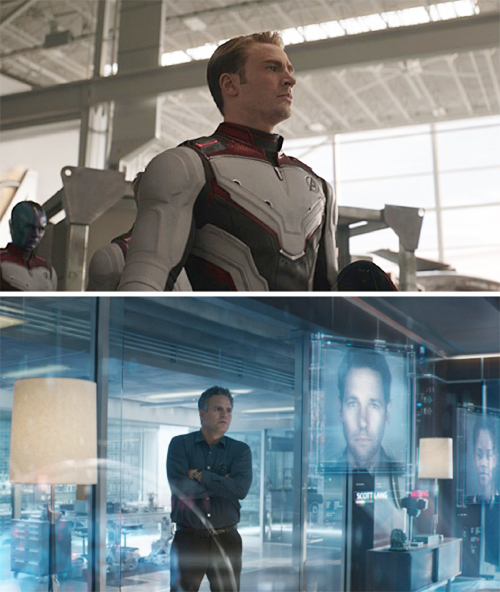 Captain America, top, played by Chris Evans, is suited up and ready to fight. Above, Dr. Banner, played by Mark Ruffalo, looks through a list of people who disappeared from the universe due to Thanos’ snap. [WALT DISNEY COMPANY KOREA]

Since “Avengers: Infinity War” came out in April 2018, fans have flooded the internet with their theories on how the final chapter would play out, combing through every detail in the Marvel Cinematic Universe (MCU) and playing out every possible scenario to figure out how the Avengers could defeat Thanos. YouTubers would summarize and provide explanations about how, what and why things happened so neatly that the Russo brothers may have been impressed if they happened upon the theories themselves. Any sort of hint — such as photo leaks from the set or each individual trailer that Marvel released ahead of the film — was gobbled up by enthusiastic moviegoers and analyzed through lively discussions on social media.

Fans got creative and even caught the attention of the film’s stars. During the film’s Asia press conference held in Seoul earlier this month, actor Robert Downey Jr. mention that his favorite theory that he saw online involved Ant-Man going inside Thanos’ body through his rear-end and expanding once he made it in. There were also rumors that the Russo brothers wanted to throw fans off guard by adding extra scenes in the trailer that were not actually part of the film.

It turns out that the Russo brothers were not quite as malevolent as some might think, as all of the scenes featured in the trailers were important parts of the story.

I found myself roaming around YouTube in search of the best fan theories and potential plotlines ahead of the “Avengers: Endgame” screening. After finally seeing the film, however, I could not help but feel the limitations of a big franchise film that has to appeal to a global audience. The scriptwriters cannot outwit the creative minds of enthusiastic fans no matter how confidential the script was kept.

Many of the theories proposed by fans panned out. For those who have kept up with these conversations online, there are no particular surprises, especially in how the Avengers eventually defeat the supervillain. But to see it all play out on screen is still spectacular and it is exciting to see all the clues and hints from previous films fit together like pieces of jigsaw puzzle.

Leaving aside some predictable moments, “Avengers: Endgame” wraps up the series nicely. I especially loved how every character — no matter how trivial their role was — adds an important contribution to the outcome of the movie. The film leaves a few mysteries for fans to puzzle over (that they will surely soon figure out) but gives the old Avengers a grand exit and features enough scenes hinting at the return of a new team of Avengers.

Nevertheless, there are no “what ifs” left at the end of the movie. If all of the previous 22 films in the MCU were one big book, then “Endgame” really does feel like the final chapter for the Avengers. Will there be another beginning, a sequel to the book? Nothing has been decided yet, but as Tony Stark always says, “Part of the journey is the end.” We ought to be satisfied with what Marvel has given us. For now.