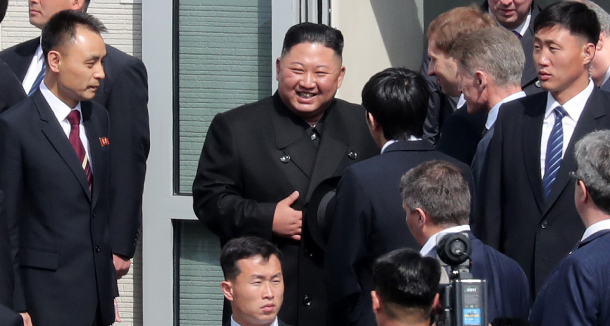 North Korean leader Kim Jong-un talks with Russian officials at Vladivostok Station in Russia on Friday before getting on his train to depart for Pyongyang. [NEWS1]

North Korean leader Kim Jong-un told Russian President Vladimir Putin during their summit on Thursday that the peace and security of the Korean Peninsula “entirely depend on the U.S. future attitude,” adding that the situation on the peninsula has reached “a critical point” and may return to its “original state.”

Pyongyang’s state-run Korean Central News Agency (KCNA) did not specify what Kim meant by returning to the “original state” in its report on Friday. But given that Kim made the remarks as he criticized Washington’s attitude in the second U.S.-North summit last February, it appeared Kim was referring to the period of heightened tension between the two countries before a whirlwind of diplomacy unfolded starting in early 2018.

Local analysts believe Kim’s statement was another nudge to the United States to lift sanctions against its regime. Sanctions relief was flatly denied in Kim’s latest meeting with U.S. President Donald Trump in Hanoi, Vietnam, and the North has since been blaming the United States for the shattered denuclearization talks.

The KCNA quickly followed up on its leader’s summit with Putin, which lasted for about three hours on Thursday in Vladivostok, Russia, but made no mention of the world “denuclearization” in its reports.

“Kim Jong Un said that the situation on the Korean peninsula and the region is now at a standstill and has reached a critical point where it may return to its original state as the U.S. took an unilateral attitude in bad faith at the recent second DPRK-U.S. summit talks,” read an English version of the KCNA report. DPRK is an acronym for North Korea’s official name, the Democratic People’s Republic of Korea.

Kim added that the regime will “gird itself” for every possible situation, according to the report.

On bilateral cooperation, both leaders discussed expanding and developing ties in “various fields,” the KCNA said, and take positive measures to energize the work of the DPRK-Russia Intergovernmental Committee for Cooperation in Trade, Economy, Science and Technology.

The leaders also vowed to take economic and trade relations to “a higher stage” as well.

Putin “readily accepted” Kim’s invitation to visit the North at “a convenient time,” the report read.

One clear sign from the KCNA report that Kim will use Moscow’s support as leverage in the denuclearization talks between Washington was that Kim and Putin held in-depth talks on how the two countries could “promote strategic communication and tactical collaboration” in the course of ensuring peace and security on the Korean Peninsula and in the region.

That mirrored the KCNA report from March 2018 that elaborated on Kim’s first summit with Chinese President Xi Jinping, when Kim said he hoped to enhance “strategic communication” with Beijing during the process of denuclearizing the Korean Peninsula and bringing about peace and stability.

During a news conference right after his summit with Kim on Thursday in Vladivostok, Putin said he will share the results of the meeting with Xi. Putin traveled to Beijing later the same day to attend the Belt and Road international forum, which kicked off yesterday and ends today.

Russia and China, both considered the strongest allies of North Korea, are veto-holding members of the United Nations Security Council, which means they have a significant role in the international sanctions imposed against Pyongyang.

The Trump administration has steadfastly refused to lift any sanctions on the North until its final, fully verified denuclearization.

A former high-level government official in Seoul said chances appeared to be slim at this point that either Russia or China would try to economically engage with North Korea right away, as denuclearization talks between the North and United States are lagging.

“If Moscow or Beijing violates international sanctions, Washington may retaliate by trying to strengthen those sanctions or use it as justification to break away from the negotiations,” the official said. The source said
Russia and China will probably try to pressure the United States to lift part of the sanctions.

Kim left Vladivostok on Friday at 3:30 p.m. on his armored train, cutting his schedule much shorter than initially planned. Kim was expected to tour the Far East city throughout the day and leave for Pyongyang at around 10 p.m.

It is not precisely known why Kim decided to leave so early, but the rainy and chilly weather could be a factor, as some of his activities were outdoors. Kim left Vladivostok Station with a big smile on his face.

Before returning home, Kim did, however, visit the Battle of Glory of the Russian Federation Pacific Fleet Memorial in Vladivostok to lay flowers and a wreath honoring fallen soldiers during World War II. Russia’s RT news outlet reported that on the wreath were inscriptions that read, “To heroic warriors who gave their lives in the struggle for the Motherland” and “Kim Jong-un.”

Around noon, Kim stopped by a restaurant in downtown Vladivostok to have lunch with the local governor and businesspeople. The restaurant was the same place where his father, Kim Jong-il, had breakfast in when he visited the city in 2002.

Kim skipped a visit to the aquarium and a ballet performance and headed straight for the train station. The North Korean leader arrived in Vladivostok on Wednesday.