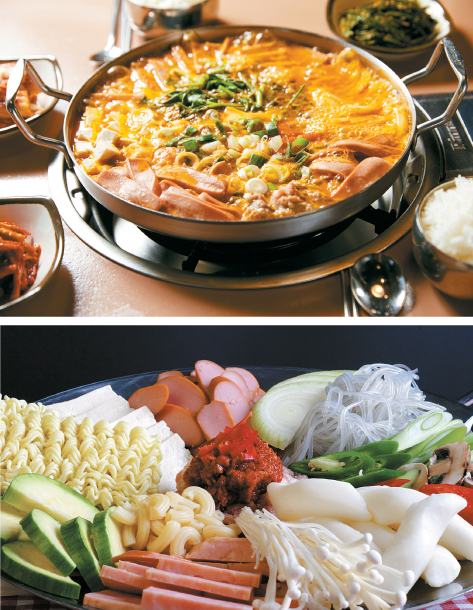 Budae jjigae can have many ingredients, but it is usually made up of processed meats, ramyeon noodles and, often times, kimchi, alongside a variety of vegetables, above, to fill up one’s appetite once it comes to boil, top. [SHUTTERSTOCK]

Koreans who love spicy food are all too familiar with the experience of filling themselves up when they’re eating a local favorite known as budae jjigae. It is never easy to control one’s hunger in front of a bubbling pot of ham, tofu and ramyeon noodles boiling in a spicy broth. Usually served in a large pot for at least two or more, the boiling pot is exciting to watch and the sound of bubbles makes the experience even more dramatic. Those versed in the various stew dishes that are popular in Korean cuisine, such as kimchi jjigae (kimchi stew) and doenjang jjigae (fermented soybean paste stew), will be familiar with the sight. However, behind the scenes, this dish that is normally considered an inexpensive and fast option has a fascinating backstory.

The dish, now seen as an everyday staple, has a surprisingly short history of just around 50 years. Budae means military base in Korean, and the dish’s name translates to military soup, as the dish was created with unused canned goods that were taken from - or snuck out of - U.S. military bases in Korea. After the Korean War (1950-53), people took processed meats and other items previously unavailable in Korea and got creative while making meals.

While American soldiers were used to grilling processed meat, Koreans added it to foods they commonly ate, such as kimchi jjigae, instead. Jjigae is a term used to indicate a stew. Jjigae is usually more boiled down than guk (soup), which has a lot more water.

Budae jjigae was most popular in Uijeongbu, Gyeonggi, a city on the outskirts of northern Seoul known for its military bases on the way to the demilitarized zone. The U.S. Army kept many of its military equipment and food in Uijeongbu, making the city abundant with food items unavailable in most of the country.

Naturally, many restaurants in the area served dishes made using ingredients they got from the military, and a neighborhood filled with budae jjigae restaurants became a place to visit.

To this day, many restaurants serving budae jjigae take their names from the city and call themselves Uijeongbu Budae Jjigae.

“This particular dish can be seen as traditional Korean food,” said food critic Hwang Kyo-ik, explaining that the dish is cooked the same way most other jjigae dishes in Korea are made, with just one additional ingredient that wasn’t previously in Korea - processed meat. “Just like the hot pepper arrived in Korea [in the late 1500s] and onions were planted more widely in the 1960s, new ingredients will continue to come into the local food scene, and when it is cooked in a way that has been used for a long time, the dish can be considered something that touches upon tradition in a bigger context.”

Technically, budae jjigae does not have a set recipe, considering the fact that it was born out of gathering available ingredients at nearby military bases. But generally, two different types of processed meat are included, chunks of Spam-like ham and slices of sausage, onions, sliced scallions, mushrooms, tofu as well as canned beans.

Most people add ramyeon noodles to fill up their stomach, but some varieties also use udon noodles for added texture. A handful of tteok (sticky rice cake) or macaroni can be added as well. Usually these ingredients are presented separately to make the look of the boiling pot more appealing.

Gochujang, or red chili paste, and other ingredients that help make the broth spicy and red are often hidden underneath the ingredients, which are naturally mixed into the broth as it comes to boil.

Some chunks of kimchi, fresh cabbage or cheese are put on top, depending on customers’ preferences. For added flavors, some people pour beef broth onto the ingredients.

Most people prefer to enjoy the dish at a restaurant with a group of people, and it is popular among people of all ages because you can control how much spice you want in the soup depending on how you make it.

It is also seen as a dish to enjoy at home when you have guests over as it is not only easy to make but also looks pretty because of the ingredients of different colors in the pot. Those who make it at home often add the spicy powder that comes with instant ramyeon noodle packages to ensure that their home-made buddae jjigae tastes good and comes with a powerful kick.