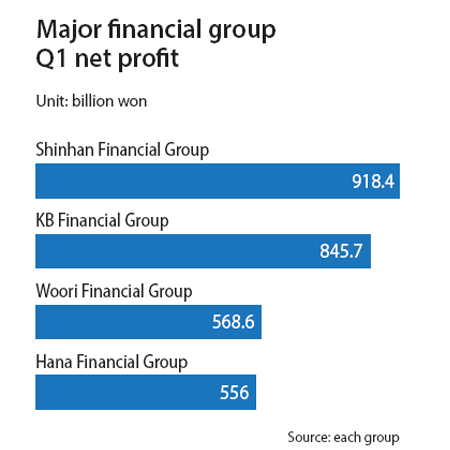 Hana Financial Group was hit hard by lower net interest margins and one-time costs like early retirement payouts at KEB Hana Bank, which pushed it behind rival Woori in terms of profit for the first three months. Hana had maintained its status as the third largest earner until the fourth quarter but came in fourth in the latest quarter.

Most of the losses came from KEB Hana Bank, which saw a 1 basis point decline in the net interest margin - the difference between what is paid to depositors and what is charged for loans - and an increase in one-off costs.

“Net interest margin at the bank slid by 1 basis point quarter on quarter in the first three months while the group’s margin fell by 5 basis points on quarter, which has to do with a decrease in credit card merchant fees,” said Kim Sang-jin, an analyst at Hyundai Motor Securities.

The analyst cited one-time costs specific to the period that included payouts to early retirees and other credit costs.

Yet non-banking affiliates managed to post higher net profit at 116.3 billion won, up 12.7 percent over a year earlier. KEB Hana Bank, on the other hands, suffered a 24-percent fall in its net profit on year.

That trend was seen in other financial groups, encouraging them to expand non-banking businesses as banking matures.

In line with that strategy, Hana Financial Group is vying to acquire a controlling stake in Lotte Card.

KB Financial Group is in a similar situation as KB Kookmin Bank’s profit was affected by tepid growth in loans.

The group’s net profit shrank 12.7 percent year on year to 845.7 billion won in the first quarter, trailing behind its archrival Shinhan Financial Group.

The interest margin at KB Kookmin Bank edged up 1 basis point in the first quarter over a year ago while the size of its loans grew only 0.3 percent.

“To generate stable profitability and strengthen our position in the market, we need inorganic growth through mergers and acquisitions,” Kim said, “Since we are weak in life insurance, we are paying attention [to a possible sale of a life insurance company].”

Shinhan Financial Group cemented its position as the top earner in the first quarter with 918.4 billion won in net profit, up 7.1 percent over a year earlier. Analysts said the group fared well thanks to its buying of firms, including Orange Life Insurance.