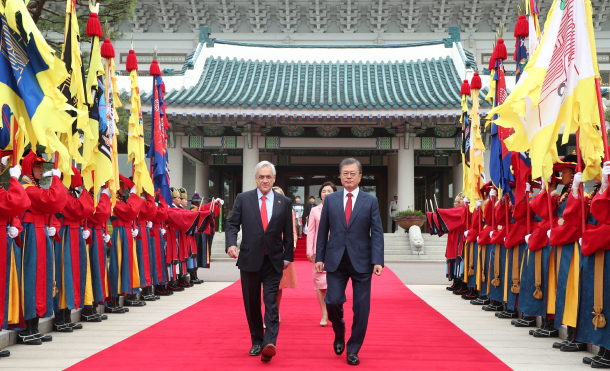 Moon met with Pinera at the Blue House in the morning and formalized Korea’s bid to become an associate member of the Pacific Alliance, winning Pinera’s support.

“Korea and Chile are economic hubs that represent Asia and Latin America,” Moon said in a joint press session after his summit with the visiting Chilean leader. “If Korea becomes an associate member of the Pacific Alliance, a free trade agreement network linking the two regions will be established. It will be a basis for grand economic cooperation across the Pacific Ocean. I hope for active support from Chile, scheduled to serve as the rotating chair of the trade bloc in the later half of this year.”

As of 2018, there were 55 observer states recognized by the alliance, including Korea.

Among the four full-time members of the Pacific Alliance, Korea has signed free trade agreements with all countries except Mexico. Associate membership of the alliance could restart free trade negotiation with Mexico, stalled since 2008.

A 15-year trade partnership between Korea and Chile was also celebrated by the two leaders.

Chile was the first free trade agreement partner of Korea. Their bilateral trade volume quadrupled to $6.28 billion last year from $1.57 billion in 2003.

At the joint press conference, Pinera also said the time has come to upgrade the free trade agreement.

“Both presidents highlighted the current negotiations for the conclusion of an upgrade of the free trade agreement, which will deepen integration in bilateral trade and investments. The two leaders concurred that this agreement, in force since 2004, has been crucial in the growth of trade between both countries,” the joint statement said.

The two leaders agreed to develop bilateral cooperation in four priority areas - e-government, the fourth industrial revolution, cybersecurity and climate change - and encouraged authorities in both governments to identify specific areas of collaboration.

After the summit, the two countries signed a treaty for defense cooperation and three memoranda of understanding to expand cooperation in information technology, transportation and a digital governance system.

According to the joint statement, Pinera recognized Moon’s efforts to achieve denuclearization and establish a permanent peace on the Korean Peninsula. “Both presidents agreed that dialogue is an essential part of the process for the establishment of peace, socioeconomic development, security, and well-being of all parties concerned as well as the region,” it said.

Moon expressed his best wishes to Chile as host of the Asia Pacific Economic Cooperation (APEC) meetings later this year, and Pinera invited Moon to attend the upcoming APEC Economic Leaders’ Meeting, which will take place in Santiago, Chile, on Nov. 16 and 17.

Moon also welcomed Chile’s hosting of the 25th session of the Conference of the Parties to the United Nations Framework Convention on Climate Change in December.

Pinera is the first Latin American leader to visit Korea since Moon took office. He had a two-day state visit starting Sunday. He visited Korea in March 2012 to attend a nuclear summit in Seoul.