Me Too leader shares story with global audience

Me Too leader shares story with global audience 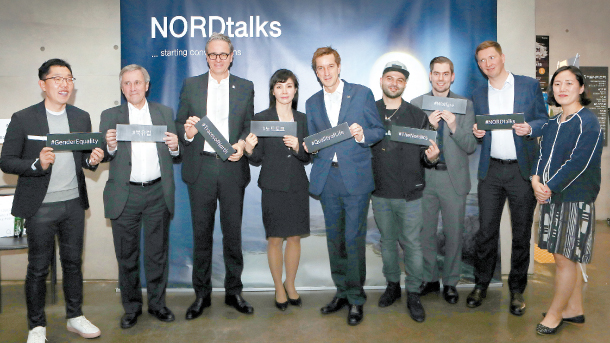 The ambassadors of Sweden, Finland and Denmark to Korea pose with speakers at the second session of NORDtalks 2019 on gender equality and welfare, including prosecutor Seo Ji-hyun, center, at Oil Tank Culture Park in western Seoul on Thursday. [PARK SANG-MOON]

Seo Ji-hyun, the prosecutor credited with starting Korea’s Me Too movement, rallied for women’s rights in Korea at a talk on gender equality and welfare hosted by Nordic embassies in Seoul on Thursday.

“It’s been a year since the Me Too movement started, but we’ve had very little change in laws or regulations,” Seo told the audience at Oil Tank Culture Park in western Seoul on Thursday. “I was starting to lose hope, but today, after seeing that many people from all over the world are taking interest into the movement and the state of women’s rights in Korea, I began to hope again.”

Seo was one of the speakers at the second talk of the series of discussions hosted by a group of Nordic embassies in Korea, called NORDtalks 2019, to celebrate the 60th anniversary of relations with Korea. Norway, Sweden and Denmark established diplomatic ties with South Korea in 1959.

“In Korea, in the past seven years, 739 women were killed by their husbands and only 8 percent of suspects of digital sex crimes were formally arrested during investigation,” Seo said. “And this is just the tip of the iceberg, as the statistics were put together by counting only cases reported by local media. There is no official data. You see, women in Korea are not calling for gender equality, they are in fact crying out not to be raped or killed.”

South Korea ranked third-highest among Organization for Economic Cooperation and Development nations in terms of violence against women as of 2014. This was measured by assessing percentage of women who agree that a husband or a partner is justified in beating his wife or partner under certain circumstances; the percentage of women who have experienced physical or sexual harassment or assault from an intimate partner at some point in life; and the state of the legal framework to protect women from domestic violence, rape or sexual harassment.

Seo appeared on the JTBC program “Newsroom” on Jan. 29 and accused a superior of groping her at a funeral in 2010. This was the major catalyst for Korea’s Me Too movement.

Soon after, victims started to come forward and many took their cases to court. One of the earliest high-profile theatrical figures to be accused of sexual assault was theater director Lee Youn-taek. He was sentenced to six years in prison in September 2018 for sexually assaulting a number of members of his theater troupe several times, beginning in 2010.

Poet Ko Un, once a strong candidate for the Nobel Prize for literature, has had his name and poems erased from Korean textbooks after he was accused of sexually harassing a number of female literary figures. His trial is ongoing.

“I’d be able to say there has been a change when people think differently about sex crimes,” Seo said. “Even today, there are many who think that the victims were at fault in cases of sexual assault.”

Other speakers at the talk shared Seo’s views.

“When there is an article about a rape case, and it says something like, ‘A woman got raped in a park,’ then the focus is on the woman and the offender is invisible,” said Shahab Ahmadian, project manager at MAN, a Swedish feminist organization. “If you want to address the issue, we need to change the focus. If the headline were to begin with, ‘Man rapes __’ then it is still the same story, but the focus is on the offender. Readers are prompted to think about who the man was, why he did it and what about the man made it so that the crime couldn’t be prevented.”

Ahmadian’s goal is to change the way men view masculinity and to involve as many men as possible in this process.

“We set the bar and we make the world believe that our way of seeing things are true - this is patriarchy,” he said. “Just having men speak about masculinity is eye-opening, there is always this a-ha moment. We have to let men in to be part of a positive change so they can see themselves in their own progress.”

But when it comes to gender equality, the way women perceive women need also be addressed, Seo said.

Since Seo was groped by her superior in 2010, she said she sought advice within the prosecution and outside of it, and she said both men and women told her to stay silent.

“There were as many women as there were men who told me to stay silent,” she said. “They all told me to leave the prosecution if I could not cope with what happened.”

Ambassadors representing some Nordic countries in Korea joined in the conversation.

“Korea is increasingly focused on issues such as inclusive growth and gender equality, especially after the Me Too movement that Ji-hyun has been targeting,” said Thomas Lehmann, ambassador of Denmark to Korea. “We have seen some steps in the right direction in Korea. I’m very optimistic, as this [change] is not something that will happen overnight. But we, in this room, want to be part of that, we want to share our experiences and reach out and share with you what we have been doing in Nordic countries.”

“These are issues that begin at home,” said Jakob Hallgren, ambassador of Sweden to Korea. “I am a father of three children and they are teenagers now, but I was on paternal leave for seven months for each of them. During that time, I realized this was a very important job - to take care of your kids and household - and the respect for many women who have been doing this starts there.”

In Sweden, fathers can take 480 days of paid paternal leave when a child is born or adopted per child before that child turns eight.

But Sweden had its own trial and error period. When Sweden adopted the paternity leave system in 1974, it allowed fathers to share their paternity leave dates with the mothers. As a result, 90 percent of paternity leave was being used by mothers only.

The Swedish government introduced what’s called “daddy month” in 1995, giving fathers 30 days of paternity leave that only fathers could use. The number of days was extended over the years, and by 2014, fathers were taking 25 percent of the leave for childcare available to the couple, according to the Swedish government.

“I look back some 14 years ago in Sweden, and I see that gender roles have changed in society,” said Hallgren. “Looking back, I’ve had many female bosses in my career, and I see that it created a more balanced and healthier and happier context of a working environment.”

NORDtalks opened in February with a discussion on education and employment in the age of the fourth industrial revolution. The next talk in the series will discuss climate change and will be held in June.