Government launches plan to make Korea a semiconductor leader by 2030

Government launches plan to make Korea a semiconductor leader by 2030 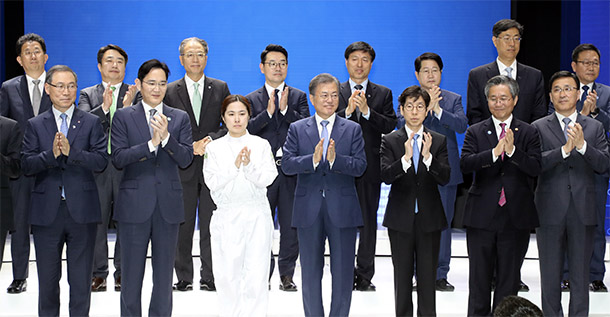 President Moon Jae-in announced that the government will invest one trillion won ($855.5 million) and introduce semiconductor-focused education programs, among other support measures, in an effort to help the country become a global leader in the non-memory semiconductor industry by 2030.

At Samsung Electronics’ semiconductor factory in Hwaseong, Gyeonggi on Tuesday, Moon affirmed the government’s commitment to develop the broader semiconductor industry beyond the country’s traditional foothold in memory chips.

“By 2030, [we] will reach the top spot in the system semiconductor foundry industry and achieve 10 percent market share in the fabless industry to become a semiconductor leader,” said Moon during the government announcement attended by semiconductor industry executives such as Samsung Electronics Vice Chairman Lee Jae-yong and SK Hynix CEO Lee Seok-hee.

Non-memory semiconductors include a wide variety of chips such as system-on-chip (SoC) processors, image sensors and voltage regulators. The industry consists of the foundry business that builds non-memory chips for outside clients and the fabless business that designs and sells chips, while outsourcing manufacturing.

In addition to targets in the fabless market, the government is aiming for a market share of 35 percent in the global foundry business and plans to create 60,000 jobs specializing in system semiconductors by 2030.

The government plan comes as demand for memory chips is falling after years of growing sales.

While Korea is home to the top two global memory chip manufacturers, Samsung Electronics and SK Hynix, the country has lagged behind in non-memory semiconductors. Last year, Korea had a 3.1 percent market share in non-memory chips according to the government.

Last week, Samsung Electronics said it will invest 133 trillion won in its non-memory chip business by 2030.

Moon expressed that the government will develop the market through public sector businesses.

“The government will open the public sector for the domestic market and find demand related to public business such as energy, safety and transportation,” he said. “From the public sector, we will create a system semiconductor market worth 240 billion won by 2030.”

The Ministry of Trade, Industry and Energy said the overall plan includes a trillion won investment until 2030 to develop next-generation chips for future industries and the creation of around 17,000 semiconductor professionals through semiconductor academic programs.

The government will encourage universities to establish semiconductor-focused departments at the undergraduate level that will be financially supported by local companies.

Under the plan, students who graduate from the departments will receive preference in employment at semiconductor-related companies.

With additional education plans such as masters and doctorate programs, the government aims to create a total of 16,800 semiconductor specialists.

It will also develop the fabless industry by creating a 100 billion won fund specifically to support fabless companies.

As for the foundry industry, the government will provide financial support for facilities investment by up to 250 billion won per company through state-owned banks.

Samsung Electronics posted disappointing earnings for the first quarter earlier on Tuesday with the company blaming weak demand for memory chips for the fall in profits.