Now the fifth-generation wireless network is here, as are promises of a revolution in how we use our phones. 5G, which could be up to 20 times faster than the current 4G LTE network, has the potential to revolutionize everything from cars and factories to entire cities as high-speed, low-latency connectivity changes how machines and infrastructure communicate.

About a month has passed since 5G was commercialized in Korea on April 3 and over 260,000 people have already switched over to the new network, seeking a revolutionary change in their everyday phone experience.

Considering early worries about the price of 5G phones and phone plans, the number of subscribers is impressively high - and to access 5G, all those subscribers must have purchased the Samsung Galaxy S10 5G. Yet high expectations can often lead to disappointment.

Disappointed early adopters have flooded online communities with complaints, largely because the network - advertised as roughly 20 times faster than the current 4G long term evolution (LTE) network - is nowhere near that fast and often proves difficult to connect to.

At the same time, non-5G users are complaining that the introduction of 5G has made LTE slower. This turned out to be a problem caused by upgrading software for network equipment at base stations that handle both 4G and 5G signals, according to mobile carriers. The issues have apparently now been resolved, but the damage to 5G’s image has already been done.

These mounting complaints raise one inevitable question: Was it really worth rushing to commercialize 5G? 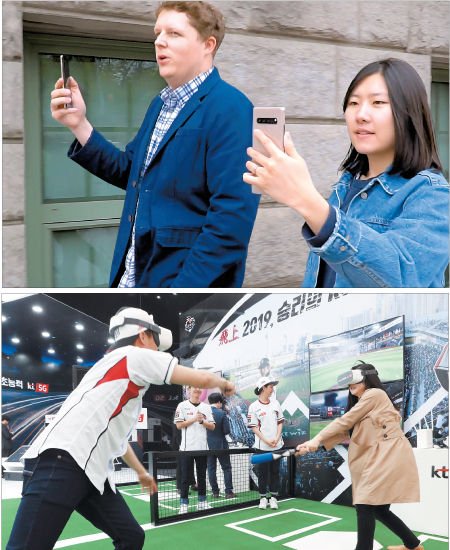 To test the connectivity, we walked from the paper’s headquarters in Jung District, central Seoul, past Seoul City Hall and on to Gwanghwamun Square. The theory was that the central downtown area, home to the headquarters of one mobile carrier and just down the road from another, would be a hotbed of 5G connectivity.

That didn’t exactly turn out to be the case. The test started in the JoongAng Building, where neither phone could connect to 5G. Stepping outside the office, one phone shifted to 5G while the other remained on 4G.

Walking down the street, it quickly became apparent how unstable the connection was. Within just a few steps both phones would flick between 4G and 5G - sometimes movements as small as changing the direction the device was facing would trigger the switch.

There were certain places, however, where 5G seemed stable, like on the road from Seoul City Hall to Cheonggye Stream, an area regularly packed with tourists.

When there was a stable 5G connection, the change in data speeds was immediately noticeable.

Still, the superfast 5G connection speeds are not much help if a user can’t get a stable connection.

With the stability of 5G continuously being questioned by the public, the Ministry of Science and ICT met with representatives of carriers and phone and network equipment manufacturers last week to discuss how to improve the networks’ quality.

One measure is to make all information on 5G coverage available to the public in a bid to win back consumer trust. KT has already voluntarily opened up its 5G coverage map when it launched its 5G service and SK Telecom quickly followed suit the following week. LG U+ started offering its coverage map on April 27, after the government ordered it to do so.

But the coverage maps aren’t actually that helpful - there are some areas where 5G is unstable even though the map clearly shows there should be coverage. The maps are at least able to show where there is no coverage at all.

According to data from the Science Ministry, the three carriers have established a total of 54,202 base stations as of April 29. Though they are currently mostly concentrated in the greater Seoul area, the ministry said 230,000 base stations will be built by the end of the year across 85 cities nationwide to offer 5G coverage to 93 percent of the Korean population.

“When LTE was first commercialized in 2011, its speed was around 75 megabits per second, much slower than its peak speed of 1 gigabit per second,” Kim said. “As we improved the network over the years, we were able to reach the maximum speed of LTE just last year - and 5G development will take similar steps.”

The Korean government already announced last month that it plans to invest more than 30 trillion won ($25.8 billion) in partnership with the private sector to establish a nationwide 5G network by 2022 and create a 5G ecosystem.

“It could feel like a rough start, but from the service operators’ point of view, this is not bad and we are getting there,” a source from the local telecoms industry said.

Korean carriers aren’t the only ones struggling to live up to customer expectations with their initial 5G service - over in the United States, Verizon, which commercialized its network an hour after Korea in parts of Chicago and Minneapolis, recently decided to waive the extra $10 monthly fee it was going to charge on top of current LTE bills for users of Samsung Electronics’ 5G phone for an undetermined period.

On April 25, The Wall Street Journal wrote that analysts have had mixed reviews of Verizon’s 5G service, “for being limited in scope.”


Why being early matters

So, back to the first question - did the Korean government and carriers really have to rush?

The government and industry experts say that being the world’s first matters, not just in terms of pride but also in terms of the economic and social benefits the technology can bring to the front-running country as the global 5G market grows.

“Having a network commercialized and having the technology developed [to commercialize the network] are totally different,” Oh Myung-dae, a marketing manager of Qualcomm CDMA Technologies Korea, told the Korea JoongAng Daily last week on the sidelines of a tech exhibition held in Seoul.

“Commercializing a network takes collaborated technologies from chipset makers and device manufacturers, as well as network equipment and parts makers. The network infrastructure customized for the Korean market will be exported to the world.”

Securing early leadership in 5G is also important because of the disruption the network can bring to a series of other industries, like entertainment, automotive and health care.

“People often picture faster data processing speeds on phones when asked about what 5G has to offer,” Samjong KPMG director Lee Hyo-jung wrote in her recent Samjong Insight report. “But 5G is actually a game changer that will bring a rise to new types of products and services in various sectors.”

The low-latency delivery of data will be very important for self-driving cars, robotic surgery and other technologies where a delay in data transfers could quite literally be a matter of life or death.

The network’s ability to simultaneously connect to a million devices per square kilometer will enable massive Internet of Things technology and offer new opportunities for smart factories and smart city businesses where processing loads of data from sensors on electronics devices, machines and infrastructure like garbage bins and parking lots is necessary.

The network is expected to create some 1,161 trillion won market globally by 2026, according to data from the Korea Information Society Development Institute. That figure includes the value created by 5G-based service providers, network equipment and device developers, as well as internet security service providers.

The network is also expected to be create jobs. Last month, the Science Ministry announced it is hoping to create 600,000 jobs by 2026 from 5G-related businesses.

So economically speaking, early adoption of 5G could really pay off. 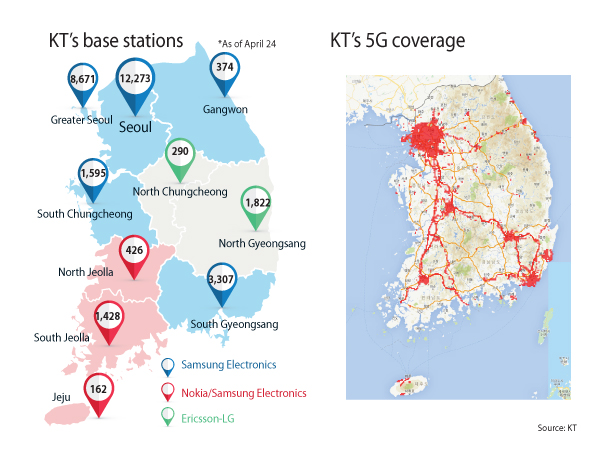 The remaining task for the government and mobile carriers now - apart from building up 5G infrastructure to stabilize the network - is to build a solid 5G business ecosystem that can turn the network from a futuristic technology to an actual moneymaker.

The government has already picked out five major 5G-based services that it will focus on. It projects that immersive media, autonomous mobility, digital health care, and smart factory and smart city solution sectors will be worth roughly 692 trillion won globally by 2026.

The most easy-to-approach service for consumers right now will be immersive media services, like virtual reality (VR) and augmented reality (AR) games.

In that field, the country’s largest mobile carrier, SK Telecom, has secured a partnership with Riot Games to broadcast League of Legends Champions Korea, one of the most watched Esports events in Korea, in VR and AR later this year. It has also inked an exclusive deal with Niantic, the developer of Pokemon Go, to launch a Harry Potter AR game later this year.

Maria Rua Aguete, executive director for IHS Markit for technology, media & telecommunication markets, wrote in her report last month that SK Telecom’s move “highlights how important consumer media and entertainment services will be to drive the adoption of 5G.”

Yet the more disruptive and money-generating aspects of 5G will likely come from enterprise targeting services like smart factories, smart cities and digital health care projects.

This is why mobile carriers are busily building partnerships with manufacturers, shipbuilders, hospitals and local governments as well.

Even before the commercial launch of 5G for phones, the first customers of SK Telecom and LG U+’s 5G services were automotive part manufacturer Myunghwa and industrial machine developer LS Mtron, respectively.

Both companies harnessed the speeds of the network through special routers that converted the 5G signal into a wireless network within their facilities.

Myunghwa is using the speedy network to screen the quality of parts moving on a conveyer belt in real time. Cameras scan parts from different angles and send the scanned images to a cloud server on 5G where artificial intelligence (AI) analyzes whether or not they are defective.

LG U+ and LS Mtron have jointly developed a remotely-controlled tractor.

“5G will not only offer a new mobile experience, but influence [the way we do business],” said Oh from Qualcomm Korea.

To allow businesses to use 5G in various scenarios, the Science Ministry is preparing to auction off roughly 2,510 megahertz more airwaves for the network by 2026 on top of the 2,680 megahertz of 5G airwaves the three mobile carriers already secured through an auction held last year.

Though the shift from 4G to 5G seems a bit unstable at this stage, the shift is expected to happen quite quickly.

“The ramp up from 4G to 5G in terms of total number of connections will occur much faster than 2G to 3G or 3G to 4G,” said Aguete from IHS Markit.