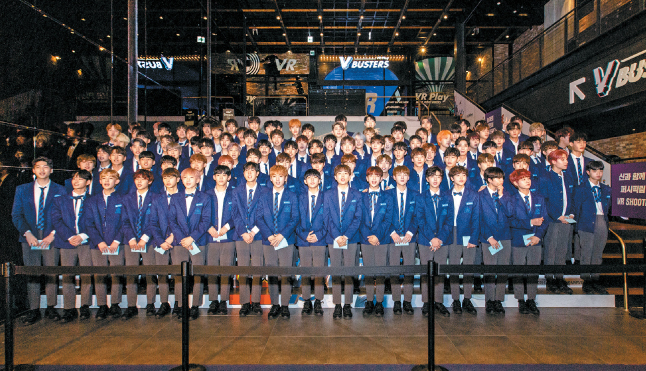 Is the next Wanna One soon upon us?

The fourth season of cable channel Mnet’s biggest show of the year, “Produce 101,” officially kicks off tonight at 11 p.m. under the title “Produce X 101.” For the next 12 weeks, 101 contestants will compete to get a slot in the next big project boy band, hoping to follow in the footsteps of their super-scale predecessors I.O.I, Wanna One and IZ*ONE.

When Mnet first announced the concept of a competition between 101 trainees from different agencies battling for spots in a girl group run by entertainment conglomerate CJ ENM, people were both excited to see the birth of a group hand-picked by their votes, but also skeptical as to whether the mixture of different agencies could prove successful. 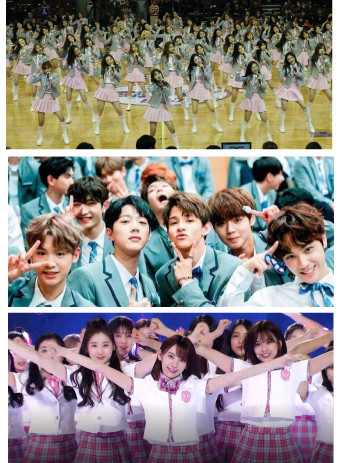 From top, contestants of the first, second and third seasons of the “Produce” series, which began in 2016. [ILGAN SPORTS]

The first season ran smoothly, ending with a viewership rating of 4.4 percent over the course of three months in early 2016. The 11 girls that debuted under the name I.O.I on May 4 stayed together until Jan. 31 the following year and released two EPs, one single and four digital singles - three of which reached the top of local music charts. Though their success was not as big as CJ, the agencies or the fans anticipated, it marked a definitive beginning of the “Produce” franchise.

It was the second season that took the show to another level. Not only did the show finish with a 5.2 percent viewership rating, the 11-member boy band that came as the result - Wanna One - topped local and overseas music charts immediately after they debuted with their first EP “1X1=1(To Be One),” and they stayed strong until their last full-length album “1¹¹=1(Power of Destiny),” which was released in November 2018.

The group’s concerts sold out in mere seconds, their music videos were streamed millions of times and they took home several major music awards in 2017. The 12-member girl group IZ*ONE, who debuted in October after the show’s third season, are also performing strong with their latest release “Violeta.”

“A lot of people have asked me what will be different in this fourth season,” said producer Ahn Joon-yong on Tuesday at the 63 Convention Center in western Seoul. “We have an overall format that’s kept the same every season. Both the trainees and the viewers have become used to the format, so we tried to tweak things here and there with something new.”

“Other groups have paved a brilliant way [in the international market]. I hope that K-pop becomes more powerful, and so we chose to write on the website, ‘To the Billboards,’” said Ahn.

Producers and trainers of “Produce X 101” explain what to expect from the upcoming season of the show on Tuesday at the 63 Convention Center, western Seoul. [MNET]

Whether or not another Wanna One will be born in the upcoming episodes, the program still has to explain itself against its biggest criticism: that the program has disturbed the traditions and ecosystem of the Korean entertainment industry.

While it was the convention and norm for entertainment agencies to train their own wannabe-stars for years and then have them debut, the entertainment conglomerate has now taken the matter into their own hands and made it “almost impossible” for small-sized agencies to succeed. If, in the past, small agencies worked hard for their groups to gain popularity over a long period of time, the mega-rookies that debut with the help of massive funding have made it almost impossible for smaller agencies to introduce their own talent, according to culture critic Ha Jae-keun.

“The series has created a system in which agencies are hugely affected by a certain TV channel. They send their trainees there because they have no choice but to get their names out, but it’s becoming harder and harder for them to make it on their own,” said Kim.

He added, “No one will know whether this season will be as successful as the previous one. People said that no one was going to watch an all-boys program, but look what happened.”

Despite the criticism, Kim Yong-bum, the director of Mnet, believes that the “Produce” series is actually a way for entertainment entities of all sizes to co-exist and cooperate.

“The idea of coexisting [with smaller agencies] was the very reason why we started the program in the first place,” said Kim. “We know that we can’t be the absolute cure for the ills of the industry, but we believe that we are giving all agencies a chance with the program. A lot of groups have come out of the ‘Produce’ series [aside from the groups made up of the finalists], and the trainees bring back a lot of positive energy to their original agencies when they return. I believe that this is coexisting, and we aim to keep the same agenda.”

Tonight’s show will start at 11 p.m. and run for 130 minutes on various platforms such as Mnet, YouTube, Naver V-Live, AbemaTV, JOOX, Mnet Japan and tvN Asia.

A Japanese version of the show will air later this year.