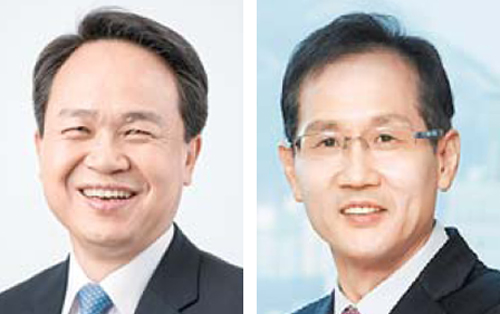 The new leaders of Korea’s largest banks are in some ways very similar.

Jin Ok-dong, CEO of Shinhan Bank, and Ji Sung-kyu, KEB Hana Bank CEO, both took office last month. They are both conversant in international business. They are also both keen on globalizing and digitizing the institutions they lead.

While the two are trying to take their banks to very similar places, they are employing different strategies.

At his inauguration last Friday, Shinhan’s Jin suddenly pointed Seo Choon-seok, Shinhan Bank’s chief digital officer. He said that in the past, bank clerks mostly majored in economics and business, so the bank relocated its departments and taught them about technology. He added that Seo also majored in business and learned IT afterward.

“Rather than his knowledge and ability in IT, he became the chief digital officer because of change in personnel,” joked Jin.

Jin added that from now on the bank has to recruit graduates with majors related to IT and use them as salespeople. He emphasized that without changing its way of thinking, the bank could not develop as a truly digitally-focused company.

It did not take long for Jin’s remarks to be realized.

According to the recruitment plan for the first half year of the year, candidates with ICT skills can be employed at any time. The key gateway is an exam that evaluates coding ability. Shinhan Bank said the goal is to assess job competency rather than academic ability. The process of hiring is now led by a person with ICT skills who previously ran the artificial intelligence (AI) division.

KEB Hana Bank’s Ji has also aimed for digital leadership since starting. His inauguration can be summarized in one phrase: the change to a digitally-oriented company. Ji first set a goal of shifting at least 2,000 bank employees among 13,000 to coding. Ji said that the most successful bank in transitioning to digital is Singapore’s DBS Bank, and that 25 percent of the bank’s employees have IT skills.

Ji’s strategy is to make use of existing employees at branches that are downsizing. Hana Bank’s plan to allow employees to select a major and a minor is also relevant. For instance, if an employee majors in business sales and minors in digital, the employee can transition to any job at any time.

The bank heads, both well acquainted with foreign markets, have differing views in terms of global strategies. Jin, who worked in Japan for 19 years, emphasizes the key currency regions. Shinhan Bank Japan (SBJ), which he helped establish, has played a strong role in raising foreign currency. It raised 250 billion yen ($2.24 billion) right after the 2008 financial crisis. SBJ has 25 percent of the global asset of the Shinhan Financial Group.

Jin said that considering the risks due to fluctuations in the Korean currency, the bank needs to have strong channels in the key currency nations as their currencies could provide liquidity during times of uncertainty. He added that he also wants to undertake mergers and acquisitions.

KEB Hana’s Ji is focused on China, where he worked for 16 years, as well as India and in countries belonging to the Association of Southeast Asian Nations.

Line Bank will be launched as the first mobile bank in Indonesia as soon as the local financial authorities approve.

“Indonesia has many islands and the accessibility of banks is low, so mobile banks have significant opportunities,” said Ji.