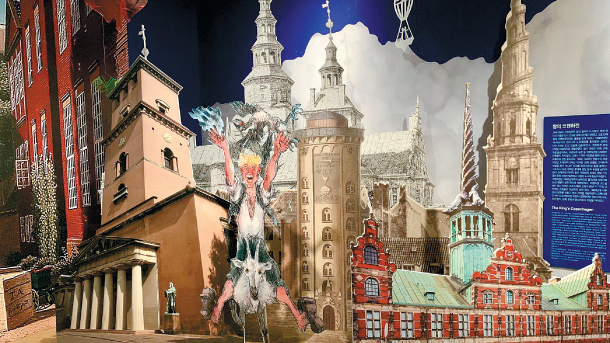 Life-size depictions of Copenhagen during Andersen’s time assembled at the exhibit, “H.C. Andersen and Copenhagen 1819,” at the Seoul Museum of History in central Seoul. [EMBASSY OF DENMARK IN KOREA]

His stories were big parts of most people’s childhoods. Maybe you shed a few tears at the ending of the “Little Mermaid” or derived hope from “The Ugly Duckling.”

To celebrate 60 years of relations with Korea, the diplomatic mission of Denmark in Korea is hosting an exhibition depicting the life of Hans Christian Andersen, told through his works, at the Seoul Museum of History in central Seoul from April 26 to July 14. The exhibition was made possible in the cooperation with the Odense City Museums and the Seoul Museum of History.

The exhibit, “H.C. Andersen and Copenhagen 1819,” follows Andersen’s footsteps after his departure from Odense, his birthplace, to Copenhagen in 1819 and his endeavors at the Royal Theatre. There, Andersen met a patron who would sponsor his education to start him on a journey as an author of 156 fairy tales, some 800 poems, 50 plays and seven novels, translated in over 150 languages.

Visitors to the exhibit walk through milestones of Andersen’s life and life-size artworks depicting the cityscape of Copenhagen during his time: a sketch of Andersen’s first home - just a small room without a window - in a street called Holmensgade, notorious for brothels at the time; an artist’s rendering of Anderson’s story, “The Shepherdess and the Chimneysweep” that depicts how a city seemed too big for a mere shepherdess - perhaps the same feeling that Andersen may have felt in Copenhagen as a budding writer; as well as some copies of his drafts for stories including “The Little Mermaid.”

“His fairy tale ‘Ugly Duckling’ (1843) portrays, in a way, the hardship of his life - of being born into the wrong circumstance, but prevailing due to an innate talent,” reads a section in the exhibit, “and for Andersen that talent was fulfilled in Copenhagen.”

The visitor even gets a glimpse of the end of the great artist, through photographs taken a year before his death in 1875. 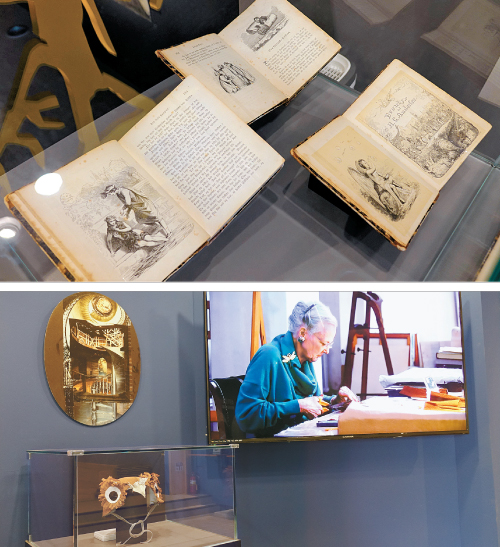 “Andersen is one of the most beloved figures in Denmark, and his iconic fairy tales are known to most children of the world - also here in Korea,” said Thomas Lehmann, Denmark’s ambassador to Korea. “We are proud to have this wonderful exhibition as part of our celebrations for the 60th anniversary of diplomatic relations and the Year of Culture. The exhibition tells a story - the story of his life and how it turned into a beautiful swan. I am confident the exhibition will bring Andersen and his fairy tales even closer to many people in Korea.

The queen of Denmark has also taken part.

“Through my decoupages, I have tried to render visible the world of fantastic images created in words by Hans Christian Andersen,” reads a statement by Queen Margrethe II of Denmark inscribed at another exhibit dedicated to Andersen on Nami Island in Chuncheon, Gangwon.

That exhibition, “Andersen’s Fairy Land: From The Little Mermaid to The Wild Swans” is being held on the island from April 20 to Aug. 25.

Organized by Nami Island Arts & Education, a company that runs the island as a resort and cultural complex, and supported by the Odense City Museums and the Danish Embassy in Seoul, the exhibition showcases 84 works by 16 different artists, including illustrator Lorenz Frolich and Queen Margrethe II, whose skills include drawing, paper cutting and decoupages. Andersen was also known for paper cutting, a traditional hobby in Denmark.

Visitors can see the queen’s decoupage rendering of “The Snow Queen” and an owl mask that she made in her studio.

Also showcased in the exhibit are some first editions of illustrated stories of Andersen, published in 1850, which have been borrowed from the Odense City Museums for the exhibit.

“The exhibition is particularly significant in that it contains 200 years of illustrations of Hans Christian Andersen’s fairy tales,” said a spokesperson from Nami Island Arts & Education. “Seven of Anderson’s fairy tales - loved as much today as they were 200 years ago - are represented in the exhibition, including ‘The Little Mermaid’ and ‘The Wild Swans.’”

The exhibition is part of Nami Island’s annual book festival, Nam Book 2019, held in May.