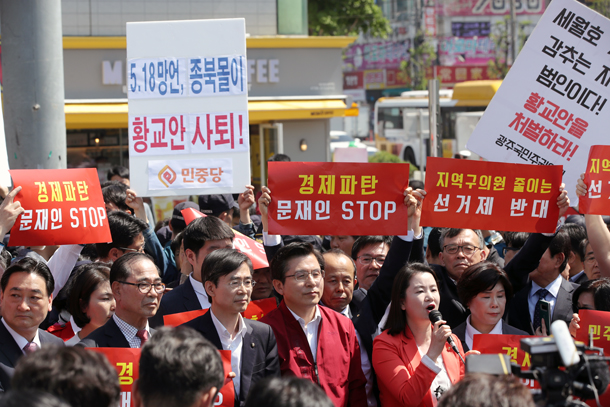 Hwang Kyo-ahn, chairman of the opposition Liberty Korea Party (LKP), center, speaks at a rally in Gwangju objecting to the fast-tracking of reform bills on Friday. In turn, locals turned up to protest some LKP members’ remarks about the Gwangju uprising in May 1980, holding up signs calling for Hwang to step down. [YONHAP]

A petition on the Blue House website calling for the dissolution of the main opposition Liberty Korea Party (LKP) has spiraled into a heated online battle between Korea’s left and right as detractors of President Moon Jae-in launched their own petition urging the ruling Democratic Party (DP) be disbanded as well.

Both petitions garnered more than 200,000 signatures so far, meaning the Blue House will be required to respond soon. Moon’s office has made it a key public relations policy to respond with a video to any petition that’s been supported by 200,000 people or more within 30 days after it has been uploaded.

The anti-LKP petition, which was posted April 22, had collected over 1.7 million signatures as of Friday, while the anti-DP petition, uploaded on April 29, had been signed by some 300,000 people.

The petition asking the presidential office to disband the LKP was uploaded the same day as when the DP and three minor opposition parties agreed to fast-track bills on electoral reform and on establishing an independent agency that will focus on crimes committed by high-ranking officials.

That was before violent scuffles between lawmakers unfolded in the National Assembly as DP lawmakers tried to force open the doors to meeting rooms to start the fast-track process while LKP lawmakers attempted to block them.

The anti-LKP petition reached the 200,000 mark on April 28, its sixth day, and grew rapidly in three days as local media went to town on the news.

The LKP has questioned the validity of the petition, accusing its supporters of being manipulated by North Korea. The party argues the petition was uploaded four days after a North Korean propaganda website, Uriminzokkiri, claimed the LKP should be disbanded.

In an editorial published on April 18, Uriminzokkiri, which is written for readers outside of North Korea, said it was the LKP’s “destiny” to be “completely dismantled” because members of the South Korean public from all walks of life are “strongly urging” so. The article blamed the conservative party for “hysterically” trying to reverse the improvement in inter-Korean relations and said it was plotting to inflict harm on North Koreans.

Citing the Uriminzokkiri article, Rep. Na Kyung-won, floor leader of the LKP, said Wednesday during a press conference at the National Assembly in Yeouido, western Seoul, that North Korean adherents in South Korea were trying to sway public opinion through the Blue House petition.

Rep. Jeong Yong-ki, who heads the LKP’s policy committee, said Thursday during a radio interview with YTN that he believed Pyongyang could have mobilized its forces within South Korea to start the online petition, which explained how it gained so many signatures in such a short time.